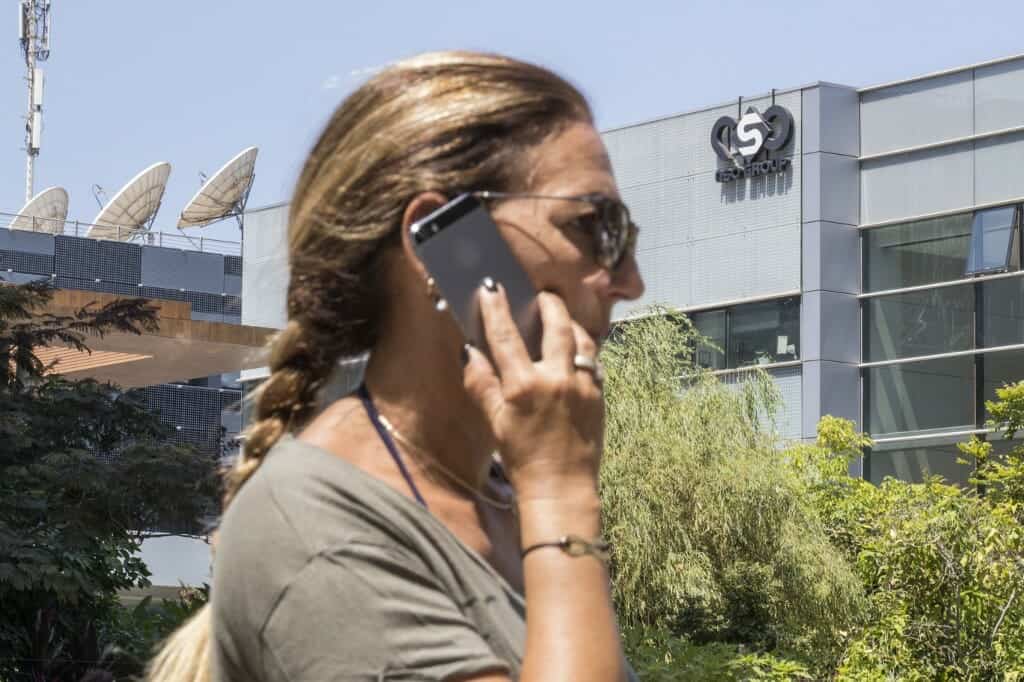 (FILES) In this file photo a woman uses her iPhone in front of the building housing the Israeli NSO group, in Herzliya, near Tel Aviv. (Photo by JACK GUEZ / AFP)

Palestinian lawyer Salah Hamouri, who is in Israeli detention, filed a complaint in France Tuesday against surveillance firm NSO Group for having “illegally infiltrated” his mobile phone with the spyware Pegasus.

Hamouri, who also holds French citizenship, is serving a four-month term of administrative detention ordered by an Israeli military court in March on the claim he is a “threat to security”.

He is one of several Palestinian activists whose phones were hacked using the Pegasus malware made by the Israeli company NSO, according to a report in November by human rights groups.

The organizations had tested the phones of members of six Palestinian non-government groups that Israel has named as terrorist organizations, including prisoner advocacy group Addameer, where Hamouri worked.

The groups concluded that six Palestinian activists working for the outlawed organizations had been infected with Pegasus.

On Tuesday, the International Federation for Human Rights (FIDH), the Human Rights League (LDH) and Hamouri filed a complaint with the Paris prosecutor.

It accused NSO of “having illegally infiltrated the telephone of rights defender Salah Hamouri,” they said in a statement sent to the AFP bureau in Jerusalem.

“Obviously, this is an operation that is part of a largely political framework given the harassment Hamouri has been subjected to for years and the attacks on human rights defenders in Israel,” attorney Patrick Baudouin, honorary president of the FIDH, told AFP.

The rights groups have filed a complaint alleging offenses — such as the violation of privacy and correspondence — to the prosecutor of the Paris judicial court in the hopes of spurring a judicial investigation.

Baudouin said Hamouri holds French nationality and that his phone was allegedly infected with Pegasus prior to his travel to France from April to May 2021, which would make French courts “competent” to judge the case.

NSO Group has faced mounting scrutiny since a consortium of news outlets revealed in July last year that its Pegasus software had been used to spy on the phones of journalists, politicians, activists or business leaders in many countries.

Israel says Hamouri is a member of the Popular Front for the Liberation of Palestine, which it and the European Union consider a “terrorist” group.