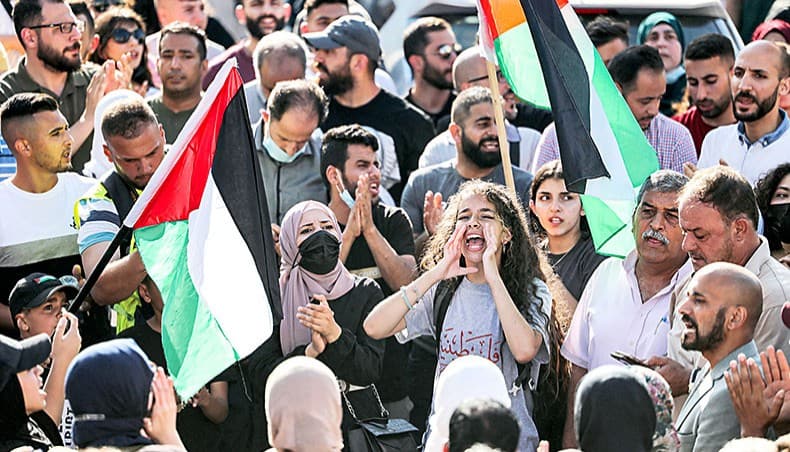 When he was locked up last week by Palestinian security forces, rights activist Issa Amro said he was thinking about his friend Nizar Banat, who would be dead within days.

Both men had become prominent critics of the Palestinian Authority, which activists say has grown increasingly intolerant of dissent.

Banat’s death on Thursday at age 43, shortly after security forces stormed his home and violently arrested him, sparked days of angry protests in the West Bank, a Palestinian territory occupied by Israel since 1967.

“When they forcefully arrested me on a baseless charge, I felt that they were determined to get rid of us,” 41-year-old Amro told AFP, referring to the PA’s alleged crackdown on critics.

“When I was in detention I thought about my friend Nizar,” Amro said. “I don’t think they were planning to kill him. I think they used violence on his body (to silence) him.”

Amro, like Banat, is from Hebron, a flashpoint West Bank city where roughly 1,000 Jewish settlers live under heavy Israeli military protection surrounded by some 200,000 Palestinians.

Both men have long records condemning the Israeli occupation, but they have also criticised the PA, which stands accused by rights groups of corruption and other violations.

In 2018, New York-based group Human Rights Watch charged that the PA was guilty of “arbitrary arrests” and the “systematic practice of torture” that “may amount to a crime against humanity”.

‘I’m scared to get killed’

The PA is led by 86-year-old president Mahmud Abbas, whose tenure had been due to end in 2009 but who has repeatedly balked at holding elections.

He most recently called off polls scheduled for May and July, blaming Israel’s refusal to guarantee voting in annexed east Jerusalem.

The PA has promised an investigation into Banat’s death and prime minister Mohammad Shtayyeh on Monday vowed that those found responsible would be punished.

But Banat’s family said it would reject the findings of such a probe, insisting the PA already knew who was involved.

Amro, who was frequently greeted as he walked with an AFP reporter through Hebron’s old city, said that working as an activist in the West Bank had become precarious.

“The environment is not safe for me,” he said. “I’m scared to get killed but I will not stop.”

He claimed he was tortured during week-long detention in 2017, beaten while locked in a small room, prevented from seeing his lawyers and even threatened with decapitation.

“I’m connected to the international community, and my voice is reaching lawmakers all around the world,” he said.

“They don’t want that. They want to be the only voice for the Palestinian people,” he said, explaining why he has been targeted by the PA.

But he stressed that he has a responsibility to discuss violations by Palestinian officials.

Amro is the founder of Youth Against Settlements, a Hebron-based group that campaigns against the proliferation of Jewish settlements in the West Bank, communities widely regarded as illegal under international law.

He told AFP he had lost track of the number of times he had been arrested by Israel.

In February, an Israeli military court handed him a three-month suspended sentence and a 3,500 shekel ($1,070) fine, after finding him guilty of organizing an “illegal” demonstration and “physically opposing” soldiers during his arrest.

London-based Amnesty International insisted Amro had been sanctioned for organizing and participating in peaceful protests, describing his punishment as being “motivated by purely political interests”.

Amro, asked about the nature of the threats he perceived from both the PA and Israel, said: “I feel sometimes I am a lonely person between two dictatorships.

“I’m scared of both,” he said, describing the Palestinian Authority as a “subcontractor” of the Jewish state.