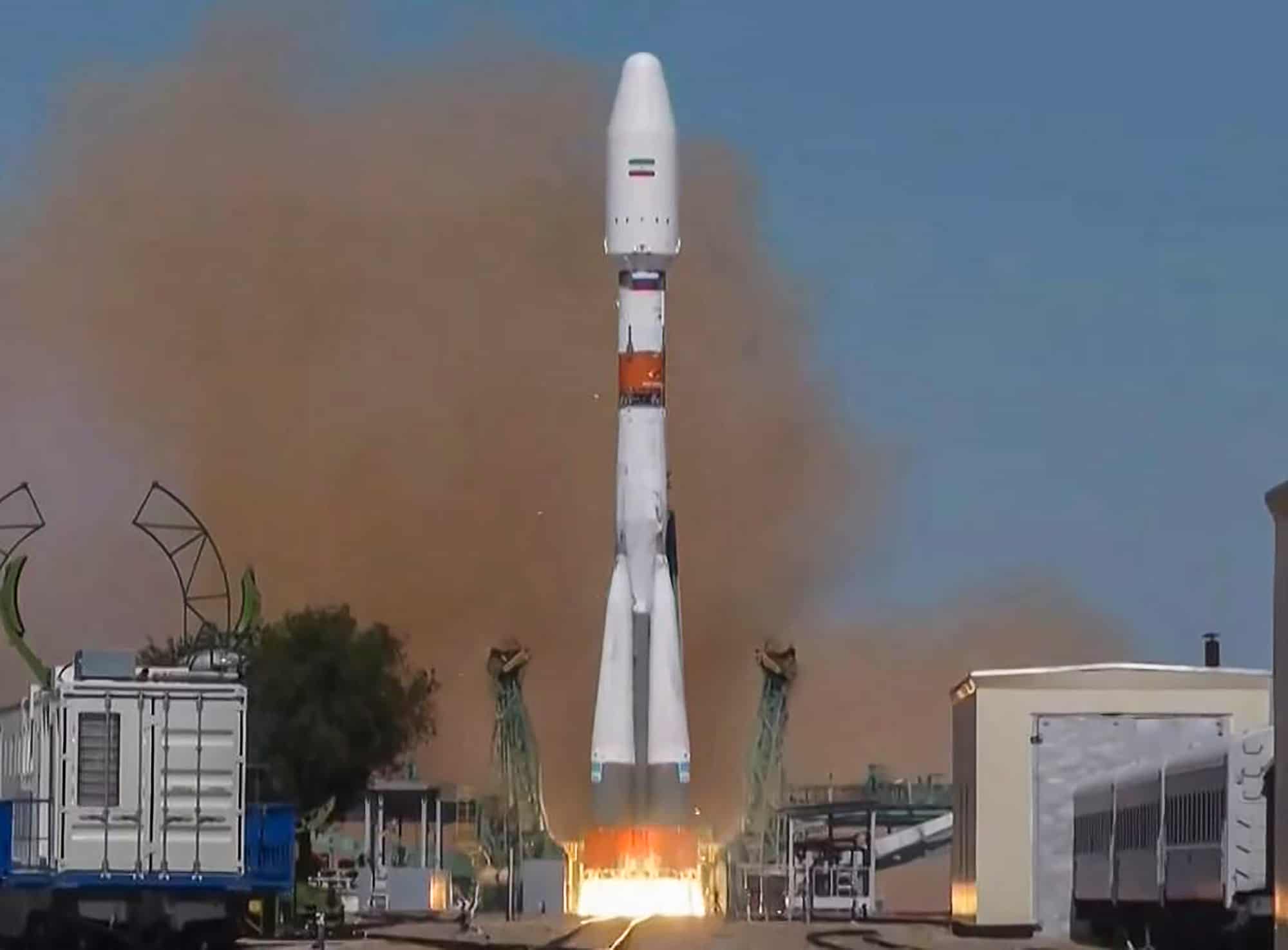 The Russian Space Agency Roscosmos shows the Soyuz-2.1b rocket carrying the Khayyam satellite blasting off from a launchpad at the Baikonur Cosmodrome. (AFP)

By TRENDS Desk AFP
August 9, 2022 3:48 pm
Share
An Iranian satellite launched by Russia blasted off from Kazakhstan early Tuesday and went into orbit amid controversy that Moscow might use it to improve its surveillance of military targets in Ukraine.
A live feed from Russian space agency Roscosmos showed the launch of the Soyuz-2.1b rocket carrying the Khayyam satellite from the Russia-controlled Baikonur cosmodrome at the scheduled time of 0552 GMT.The Russian mission control confirmed its subsequent entry into orbit.Iran, which has maintained ties with Moscow and refrained from criticism of the Ukraine invasion, has sought to deflect suspicions that Moscow could use Khayyam to spy on Ukraine.

Last week, US daily The Washington Post quoted anonymous Western intelligence officials as saying that Russia “plans to use the satellite for several months or longer” to assist its war efforts before allowing Iran to take control.

But the Iranian Space Agency said on Sunday that the Islamic republic would control the Khayyam satellite “from day one”.

“No third country is able to access the information” sent by the satellite due to its “encrypted algorithm,” it said.

The purpose of Khayyam is to “monitor the country’s borders”, enhance agricultural productivity and monitor water resources and natural disasters, the space agency said.

In a pre-launch statement on Monday ISA praised “the high reliability factor of the Soyuz launcher”.

“Due to Khayyam satellite’s weight of more than half a ton and the very high success rate of the Soyuz launcher, the launch of the Khayyam satellite has been entrusted to Russia,” the statement on the space agency’s website noted.

As Moscow’s international isolation grows under the weight of Western sanctions over Ukraine, the Kremlin is seeking to pivot Russia towards the Middle East, Asia and Africa and find new clients for the country’s embattled space program.

Khayyam, apparently named after the 11th-century Persian polymath Omar Khayyam, will not be the first Iranian satellite that Russia has put into space in 2005, Iran’s Sina-1 satellite was deployed from Russia’s Plesetsk cosmodrome.

Iran is currently negotiating with world powers, including Moscow, to salvage a 2015 deal aimed at reining in Tehran’s nuclear ambitions.

The United States which quit the landmark Joint Comprehensive Plan of Action or JCPOA under then-president Donald Trump in 2018 has accused Iran of effectively supporting Russia’s war against Ukraine while adopting a “veil of neutrality”.

During his meeting with Putin last month, Iran’s Khamenei called for “long-term cooperation” with Russia, and Tehran has refused to join international condemnation of Moscow’s invasion of its pro-Western neighbor.

Iran insists its space program is for civilian and defense purposes only, and does not breach the 2015 nuclear deal, or any other international agreement.

Western governments worry that satellite launch systems incorporate technologies interchangeable with those used in ballistic missiles capable of delivering a nuclear warhead, something Iran has always denied wanting to build.

Iran successfully put its first military satellite into orbit in April 2020, drawing a sharp rebuke from the United States.