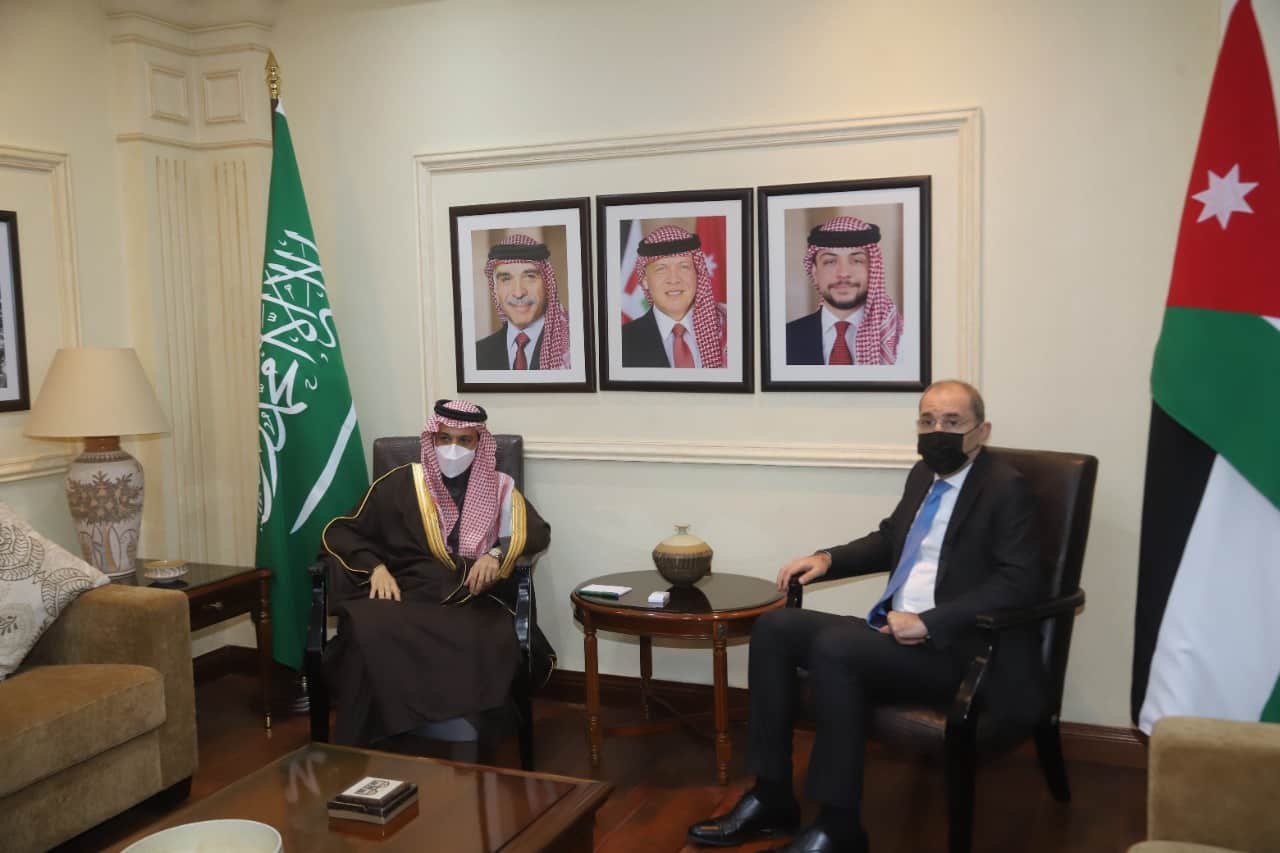 Jordan and Saudi foreign ministers met in Amman on Monday.

The meeting underscored the Jordan-Saudi “strategic” ties and emphasised the importance of the institutionalisation of bilateral cooperation on investment, development and environment.

Ayman Safadi, Jordan’s foreign minister, and his Saudi counterpart Prince Faisal al-Saud discussed the Palestinian-Israeli conflict and emphasised that the solution to the conflict should be based on the two-state solution and the Arab Peace Initiative.

They highlighted that a just solution should meet the demands of the Palestinians, especially their right to establish a state along the June 4, 1967 borders with East Jerusalem as its capital.

On Yemen and the Gulf security, Safadi said that Jordan stands in solidarity with Saudi, as the country grapples with threats to its stability. He voiced Jordan’s condemnation of the Houthi group’s attacks against Saudi’s territories.

They also discussed Iraq, Libya, the Syrian crisis and the developments in Afghanistan. The Iran nuclear threat and its regional policy also came up for discussion.

Safadi told journalists following the talks that the Jordan-Saudi talks are expanding and that the meeting discussed many topics, which are being deliberated by the concerned parties.

He highlighted that Jordan has been a staunch supporter of Saudi Arabia.

“As his Majesty King Abdulla II said, our nation is one and our fate is common, and we are going forward with cooperation on whatever serves our interests and those of our Arab world,” Safadi,  who is also deputy prime minister, said.

He praised Saudi Arabia’s efforts to bring an end to the Yemen crisis.

Safadi reiterated that for Jordan and Saudi Arabia, the Palestinian cause has been and will continue to be a “central” cause, adding that the two countries are keen to find a political breakthrough that would ensure the rights of Palestinians based on the two-state solution.

He said that he and his Saudi counterpart agree and share the same position on Libya, Syria and Iraq, highlighting the two countries will continue their efforts to solve regional crises. He added that they see eye to eye on the importance of activating the pan-Arab role in solving regional crises.

Prince Faisal al-Saud said that Jordan and Saudi’s ties are characterised by mutual respect and are founded on cooperation. He added the meeting was “fruitful and constructive.”

“We have discussed the political and security challenges our region faces, and we have emphasised the need to bolster cooperation and coordination on these challenges,” he added.

He highlighted Jordan’s “important” part in supporting the Palestinians to secure their rights and the Kingdom’s support for Saudi Arabia against the terrorist attacks by the Houthi militias.

Al-Saud said, “We have iterated that our hands as Arabs are extended to the brothers in Iran in case they respond and start to address the Arab concerns about security and stability in the region.”