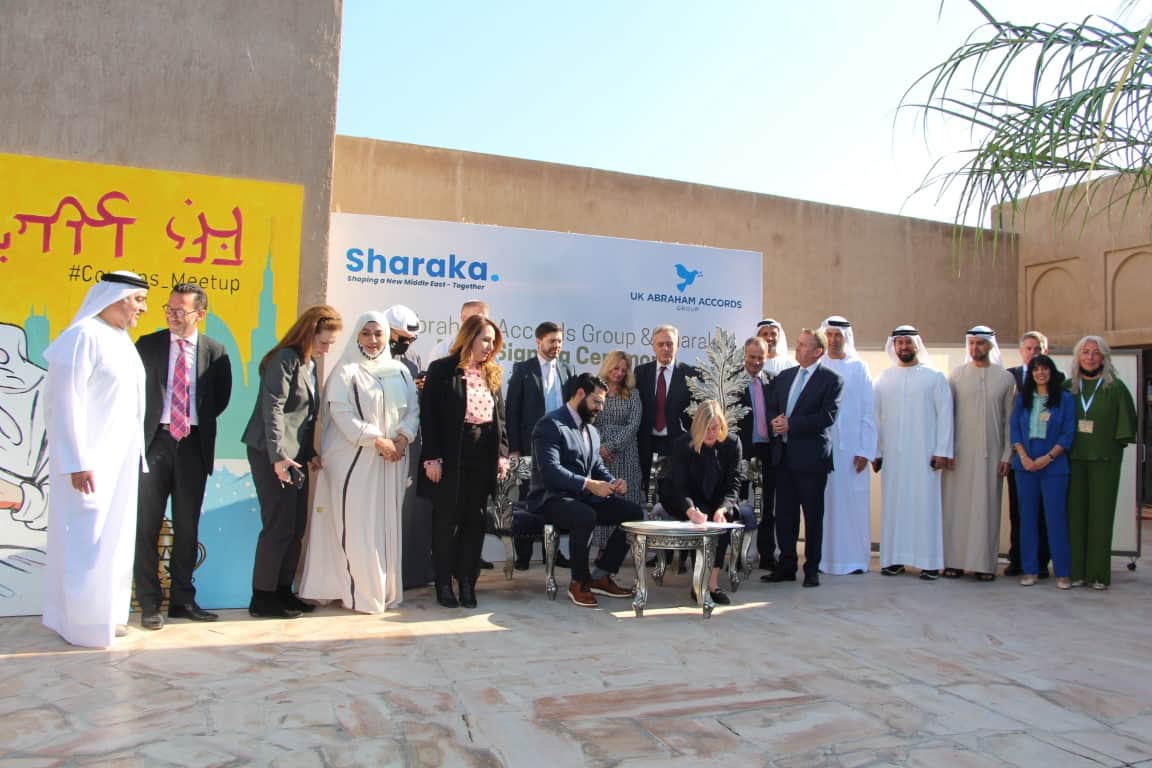 Leaders of the UK Abraham Accords Group and Sharaka will sign a cooperation agreement at a private event at the Crossroads of Civilizations Museum in Dubai.

Dr. Fox is leading a delegation of British MPs to see first-hand the impact Abraham Accords is making on trade and industry, religious and cultural cooperation.

Signing on behalf of Sharaka will be Amit Deri, Israeli Co-Founder and CEO, and Dr. Majid Al Sarrah, its Emirati Co-Founder and UAE CEO. Offering remarks will be Dr. Fox and Dr. Al Sarrah, as well as Ahmed Al Mansoori, Founder of the museum. In attendance will be Mansour Abdullah Khalfan Belhoul, UAE Ambassador to the UK, along with the UK delegation, senior members and activists from Sharaka, including Global Affairs Director, Dan Feferman, US CEO Omar Al Busaidy and Media and Academic Advisor, Dr. Najat Al Saeed, as well as senior figures from the diplomatic community, UAE government and policy community, and leading members of the UAE’s Jewish community.

The Rt Hon Dr. Liam Fox MP said, “The UK Abraham Accords Group is pleased to work with Sharaka. Both of our organizations are committed to furthering the goals of the Abraham Accords, and promote peace and prosperity in the Middle East. We hope that through this new partnership we will make an impact beyond borders and spread the message of peace to all.”

Majid Al Sarrah added, “The Abraham Accords continue to prosper and prove that they offer a sustainable and successful peace model. Sharaka took the lead among non-governmental groups to bring people together in the name of peace and the desire to build a bright future. To see Sharaka signing significant agreements with such an important and influential group from the UK (and previously from the US), will result in helping bolster the peace model and push it forward.”

Amit Deri said, “We are honored to be signing this agreement to promote the common purpose of further promoting the Abraham Accords and the new model for peace and partnership in the Middle East. We are glad to see the UK encouraging support of the international community, and look forward to working with the UK Abraham Accords Group and Dr. Liam Fox MP, a long-time supporter of peace and moderation in the region. This approach proves that dialogue and cooperation are the way forward.”

The UK Abraham Accords Group and Sharaka agree to mutually promote the economic and cultural ties among the Abraham Accords countries and identify and pursue ways to build upon the Accords in the Middle East. Furthermore, these organizations will work to expand awareness of the Accords and their positive impact in the UK.

Together, the UK Abraham Accords Group and Sharaka will work to identify influencers from the Abraham Accords countries in the media, society, academia, business, and other fields and bring them on mutual visits – Israelis to the Arab world, people from the Arab world to Israel, and joint delegations to the UK. They will follow up by seeking areas for regional cooperation in a variety of fields to create a meaningful and positive impact.

They will work to measure the impact of the new cooperation between Israel and the Abraham Accords countries; identify and pursue areas of cooperation between the countries; work to build multi-lateral forums in the region on issues of shared importance; help communicate the importance and benefits of the accords to a broader audience regionally and in the UK; and participate in each other’s events to help continue promoting the accords and their expansion in the Middle East.

The UK Abraham Accords Group is a non-partisan, non-profit UK organization dedicated to supporting the implementation and expansion of the historic peace agreements in the Middle East, known as the Abraham Accords. The Rt Hon Dr. Fox MP was appointed to his position by the UAE, Bahrain and Israeli ambassadors to the UK.

Sharaka, which means ‘partnership’, is a non-profit, non-partisan organization founded by young leaders from Israel and the Gulf to turn the vision of people-to-people peace into a reality and encourage citizen diplomacy.