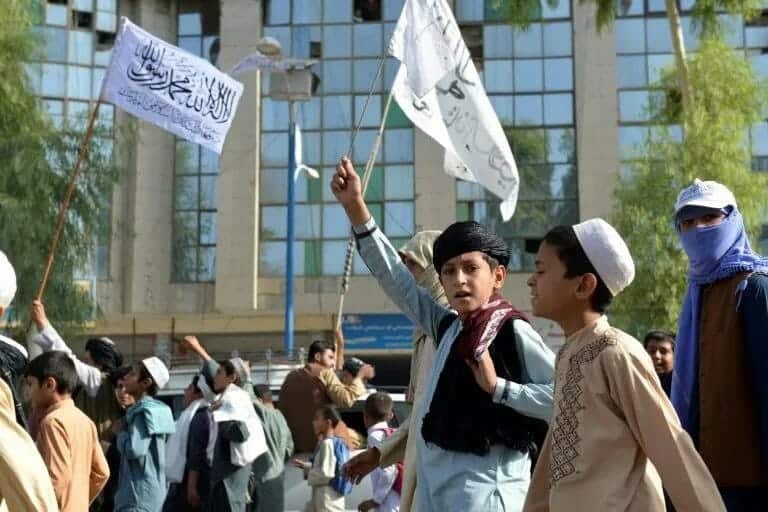 WASHINGTON: The Taliban prepared on Wednesday to stage a parade showcasing some of the military hardware they captured during their takeover of Afghanistan, after President Joe Biden defended his decision to end the two-decade war.

The Taliban celebrated the US withdrawal, which was completed on Monday, as a major victory after taking control of Afghanistan last month following a bloody insurgency.

A long line of green Humvees idled in single file on a highway outside Kandahar, the spiritual birthplace of the militant movement, many with white-and-black Taliban flags attached to aerials, an AFP journalist saw.

In footage posted on a pro-Taliban account of the build-up of the parade, a helicopter flew overhead, trailing the Taliban’s standard beneath it as fighters wrapped in headscarves waved beneath.

At least one Black Hawk helicopter has been seen flying over Kandahar in recent days, suggesting someone from the former Afghan army was at the controls as the Taliban lack qualified pilots.

The United Nations warned, meanwhile, of a looming “humanitarian catastrophe”, underscoring the daunting challenges that the Taliban face as they transform from insurgent group to governing power.

“This is the right decision. A wise decision. And the best decision for America,” Biden said in an address to the nation.

For America, Biden argued, the only choice was “leaving or escalating.”

The president, who has been savaged by critics for his handling of the withdrawal which saw the US and its allies evacuate more than 122,000 in just over two weeks, as an “extraordinary success.”

“No nation has ever done anything like it in all of history; only the United States had the capacity and the will and ability to do it,” he said.

All eyes will now turn to how the Taliban handle their first few days with sole authority over the country, with a sharp focus on whether they will allow free departure for those wanting to leave — including some foreigners.

The US has said that “under 200” of its citizens remain in the country, and Britain said the number of UK nationals inside was in the “low hundreds.”

Thousands of Afghans who worked with the US-backed government over the years and fear retribution still want to get out.

Talks are ongoing as to who will now run Kabul airport, which German Chancellor Angela Merkel warned was of “existential importance” as a lifeline for aid.

Many Afghans are terrified of a repeat of the Taliban’s initial rule from 1996-2001, which was infamous for their treatment of women and girls, as well as a brutal justice system.

The group has repeatedly promised a more tolerant brand of governance compared with their first stint in power.

But UN chief Antonio Guterres expressed his “grave concern at the deepening humanitarian and economic crisis in the country,” adding that basic services threatened to collapse “completely.”

He pleaded for financial support from the international community for the war-ravaged country, which is dependent on foreign aid.

Authorities from several countries have already begun meeting with Taliban leadership, the latest being India.

Qatar’s foreign minister, Sheikh Mohammed bin Abdulrahman al-Thani, urged the Taliban to combat terrorism after the US withdrawal, and called for an inclusive government.

The US-led airlift began as the Taliban completed an astonishing rout of government forces around the country and took over the capital on August 15.

The withdrawal came just before the August 31 deadline set by Biden to end the war, which began with a US-led invasion that ousted the Taliban in the wake of 9/11, but later reached a stalemate on the battlefield with the resurgent militants.

The conflict has claimed the lives of tens of thousands of Afghans and more than 2,400 American service members.

The evacuation was complicated by a threat from the regional offshoot of the Islamic State group, rivals of the Taliban.

Thirteen US troops were among more than 100 people killed when an IS suicide bomber attacked the perimeter of the airport, where desperate Afghans had massed in the hope of boarding an evacuation flight.

Biden said Tuesday that the United States would continue the fight against terrorism in Afghanistan and other countries, and warned IS: “We are not done with you yet.”