Turkey and Turkmenistan to scale up bilateral trade to $5bn 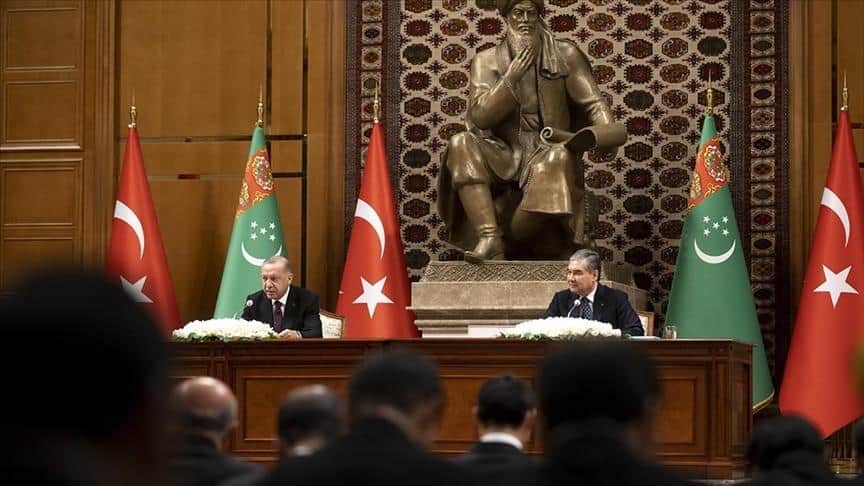 Recep Tayyip Erdogan of Turkey and Gurbanguly Berdimuhamedow of Turkmenistan at a joint press conference.

Turkey and Turkmenistan have set themselves the target of scaling up the bilateral trade to $5 billion, as two countries have inched very close to each other in the past few years.

“We are determined to take the necessary steps to increase our trade volume to $5 billion, as planned,” Recep Tayyip Erdogan the Turkish president said on Saturday, in the Turkmen capital Ashgabat, at a joint press conference alongside his counterpart Gurbanguly Berdimuhamedow.

The official visit came just weeks after Turkey hosted Berdimuhamedow as an observer at an Organization of Turkic States summit in Istanbul — the first time a Turkmen president attended a meeting of the body, formerly known as the Turkic Council.

“As part of our brotherly relations, we will continue to support Turkmenistan and its strategy of neutrality, which it pursues successfully,” Erdogan said, adding that during their meeting, the two leaders discussed all aspects of ties between the two countries “based on brotherhood”.

“We exchanged views on what we can do to improve our cooperation in the field of energy, as well as land and air transport,” he went on to say.

As part of their strategic cooperation based on historical and cultural partnership, the two countries agreed to accelerate their relations in such fields as education, culture, youth, and sports, Erdogan said, also noting that he and Berdimuhamedow had signed a joint declaration of nine articles that further strengthened their countries’ ties.

He underlined that Ankara was the first country to recognize the country’s independence and open an embassy in its capital.

Following the joint press conference, President Erdogan was awarded the Order of Turkmenistan.

Thanking the Turkmen leader for the distinction, he said the order was “a concrete manifestation of our developing relations in every field on the basis of mutual respect, understanding and common interests.”

Erdogan will attend the 15th Leaders’ Summit of Economic Cooperation Organization (ECO) slated for Sunday, which will be headed by Berdimuhamedow.

The Turkish president is also expected to hold bilateral talks with the leaders of some of the organization’s member countries and hand over its term presidency to Turkmenistan.

For his part, President Berdimuhamedow said developing long-term strategic relations with Turkey was one of the primary objectives of Turkmenistan’s foreign policy.

“We confirmed our readiness to expand and diversify cooperation,” he said, adding that Erdogan “has made great efforts to ensure peace and stability.”

“We highly value his (Erdogan) particular interest in strengthening friendly relations between Turkmenistan and Turkey.”

Noting that they had reached an agreement on the delivery of energy resources to the European market, Berdimuhamedow said a corridor that includes Afghanistan, Turkmenistan, Azerbaijan, Georgia, and Turkey was also on the table.

He said the use of Turkmenistan’s Port of Turkmenbashi and the Caspian Sea’s port supply system was discussed for the formation of effective transport corridors between the Caspian and the Black Sea regions.