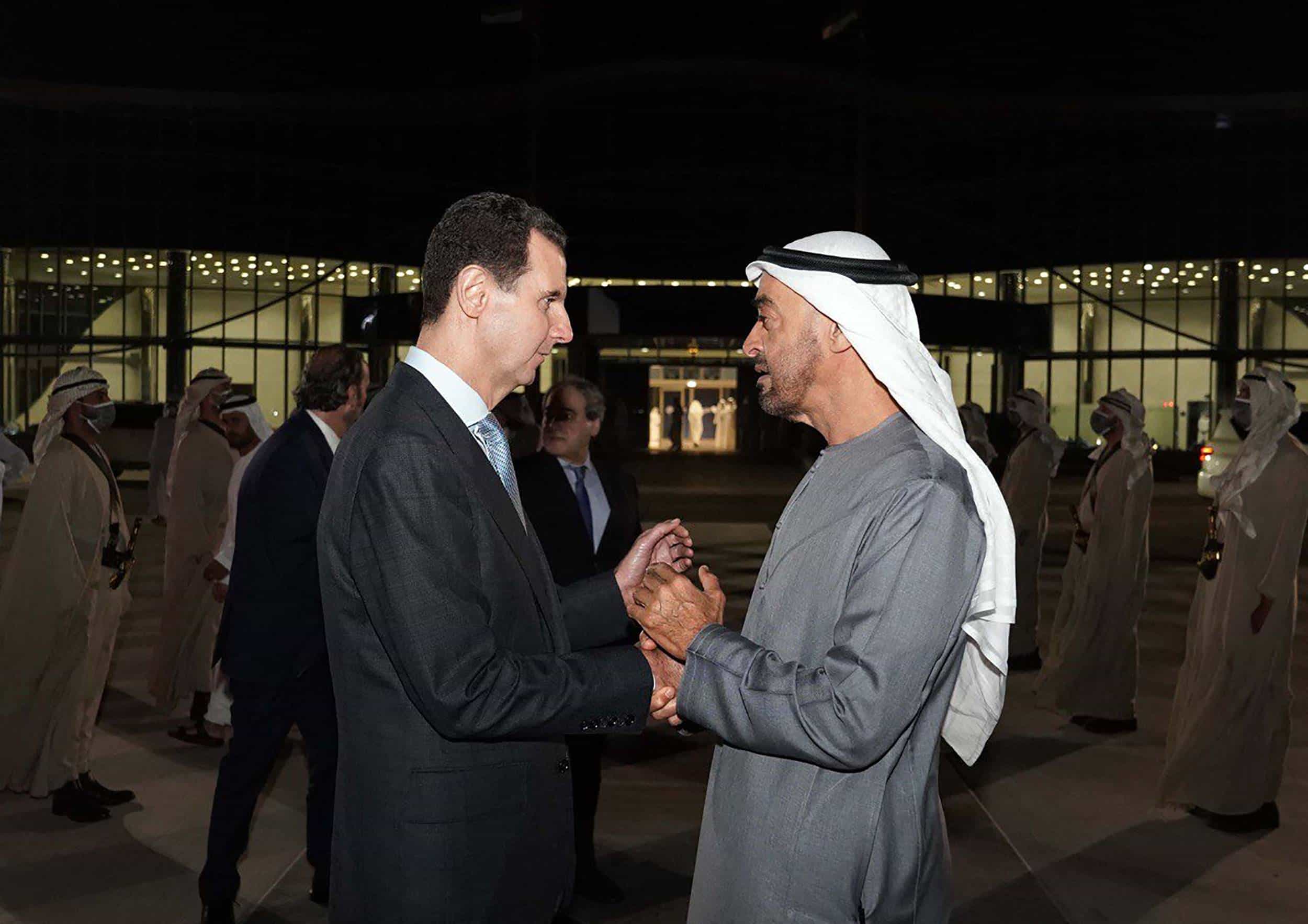 The Syrian President's visit to the UAE capital Abu Dhabi last Friday was his first to an Arab state in more than a decade of brutal civil war that has killed close to half a million people.

A surprise visit by Syria’s Bashar al-Assad to the oil-rich United Arab Emirates opens the door to his isolated regime’s return to the embrace of the Arab world, analysts say.

The president’s trip also showed that a more assertive UAE is willing to upset its ally Washington with a rapprochement with Assad, whose Russia- and Iran-backed regime is accused of crimes against humanity.

The Syrian president’s visit to the UAE capital Abu Dhabi last Friday was his first to an Arab state in more than a decade of brutal civil war that has killed close to half a million people.

Washington was “profoundly disappointed and troubled by this apparent attempt to legitimize Bashar al-Assad,” said US State Department spokesman Ned Price, who stressed that “we do not support efforts to rehabilitate Assad.”

Badr al-Saif, a history professor at Kuwait University, said the UAE has pushed for Syria’s return to the Arab fold “regardless of the role of the regime in the death and displacement of many Syrians”.

He said the bold move reflects the way the UAE — a wealthy state that has militarily intervened in conflicts in Libya, Yemen and elsewhere — now sees itself as a regional power broker.

“The UAE’s self-perception is at the heart of its policy making,” Saif said. “It sees itself as the leader of the Arab world, where it initiates and hopes the rest will follow.

“Its reception of Bashar al-Assad is best understood in this light.”

When Assad first launched his bloody crackdown on mostly peaceful demonstrations, plunging the country into civil war from 2011, most Arab countries severed ties with Syria.

Several Gulf states supported rebels fighting against Assad’s forces. The regime had all but lost the war when Russia military intervened on its side in 2015, allowing Damascus to regain most of the territory it had lost.

The UAE has made clear that it opposes the so-called Arab Spring movements, especially in Syria where Islamism, its biggest enemy, was gaining power through jihadist groups.

In recent years Abu Dhabi has led an Arab overture to Damascus as the Assad regime has consolidated power.

The Syrian government, for its part, is desperate to revive economic ties with wealthy Arab states after years of war and US sanctions. At least 90 per cent of Syrians live in poverty and more than half have been displaced by war.

The struggle over Syria’s role is playing out in an era when the United States has signaled a strategic “pivot to Asia”, and weeks after Russia stunned the world by launching its Ukraine invasion.

Assad’s trip came shortly after a Moscow meeting between the Emirati foreign minister and his counterpart Sergei Lavrov, and weeks after Russia launched its war, which the Assad regime vocally supported.

The UAE and Saudi Arabia have shied away from taking sides, despite calls by Western allies to condemn Moscow, and also resisted pleas to boost energy output to bring down global prices.

Nicholas Heras of the Newlines Institute said the UAE, by embracing Assad, is positioning itself as “the power broker in the Middle East, and in wider Eurasia, that all sides to conflicts can turn to”.

In fostering closer ties with Syria, the Emiratis “see an opportunity to broker a future order in the Middle East that stabilizes the region, because Assad won his civil war and a nuclear weapons power backs him fully,” he said.

The UAE sees Russia as “an important player in the Middle East for years to come, and a more predictable external power than the Americans,” Heras added.

Al-Saif, the historian, said the UAE’s moves are actually in line with US calls for its allies in the region to assume more responsibility for their own security.

“The UAE has been engaging in just that, and it means there will not always be total alignment with the US as each state pursues its interests,” he said.

He added that relations between the US and UAE, a strategic partner that has hosted American troops, will ultimately not suffer from the rapprochement with Syria.

Dalia Dassa Kaye, senior fellow at UCLA Burkle Center for International Relations, pointed out on Twitter that the UAE-Syria normalization had been underway for some time.

But, she added, “for the UAE to host this close Putin ally in the midst of the Ukraine war, where Russia is repeating its brutal Syria playbook, is quite a message.”