US, allies lambast Russia over Ukraine at UN Security Council 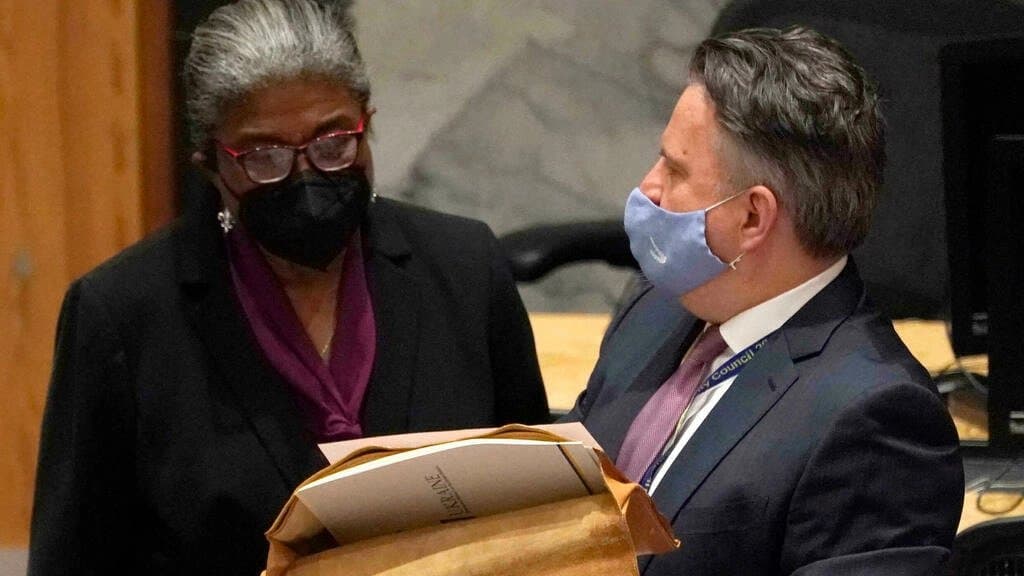 Ukraine's UN representative Sergiy Kyslytsya (R) talks with US ambassador to the UN Linda Thomas-Greenfield during an emergency Security Council meeting on the Ukraine crisis, in New York. AFP

The United States and its allies rounded on Russia during an emergency Security Council session Monday, denouncing Vladimir Putin’s recognition of rebel-held areas in Ukraine and his ordered deployment of troops as a gross violation of international law and “pretext for war.”

Addressing the session, US Ambassador Linda Thomas-Greenfield heaped scorn on Putin’s assertion that the Russian troops would take on a peacekeeping role in the Donetsk and Lugansk areas.

“He calls them peacekeepers. This is nonsense. We know what they really are,” Thomas-Greenfield said.

Moscow is still “open to diplomacy for a diplomatic solution,” said Russia’s ambassador to the UN Vasily Nebenzya.

“However, allowing a new bloodbath in the Donbass is something we do not intend to do,” he added, referring to the region encompassing Donetsk and Lugansk.

Putin’s order has been widely seen as paving the way for an operation to deploy part of the potential invasion force he has massed on Ukraine’s borders.

In a lengthy televised national address announcing his recognition of the rebel-held areas, Putin railed against Ukraine as a failed state and “puppet” of the West, repeatedly suggesting it was essentially part of Russia.

Thomas-Greenfield said the speech amounted to a “series of outrageous, false claims” that were aimed at “creating a pretext for war.”

Her remarks came just before a White House spokesperson told AFP that Washington on Tuesday would impose sanctions on Moscow following Putin’s order.

Russia, which currently holds the rotating presidency of the Council, had wanted the session to be closed but the United States insisted it be public.

The Under Secretary-General for Political and Peacebuilding Affairs, Rosemary DiCarlo, voiced “regret” that Russian troops were ordered to Eastern Ukraine.

“The next hours and days will be critical,” DiCarlo said. “The risk of major conflict is real and needs to be prevented at all costs.”

Putin’s recognition of the separatist republics effectively buries a fragile 2015 peace plan for the conflict, and opens the door for direct Russian military involvement.

Moscow provided no details or date for any deployment of the “peacekeeping” forces, only saying that it “comes into force from the day it was signed.”

British envoy Barbara Woodward said the council must be united in urging Russia to “deescalate” and “respect its obligations.”

“Russia has brought us to the brink. We urge Russia to step back,” Woodward said, as Martin Kimani of Kenya said Russia’s move “breaches the territorial integrity of Ukraine.”

“Multilateralism lies on its deathbed tonight. It has been assaulted today, as it as it has been by other powerful states in the recent past,” Kimani said.