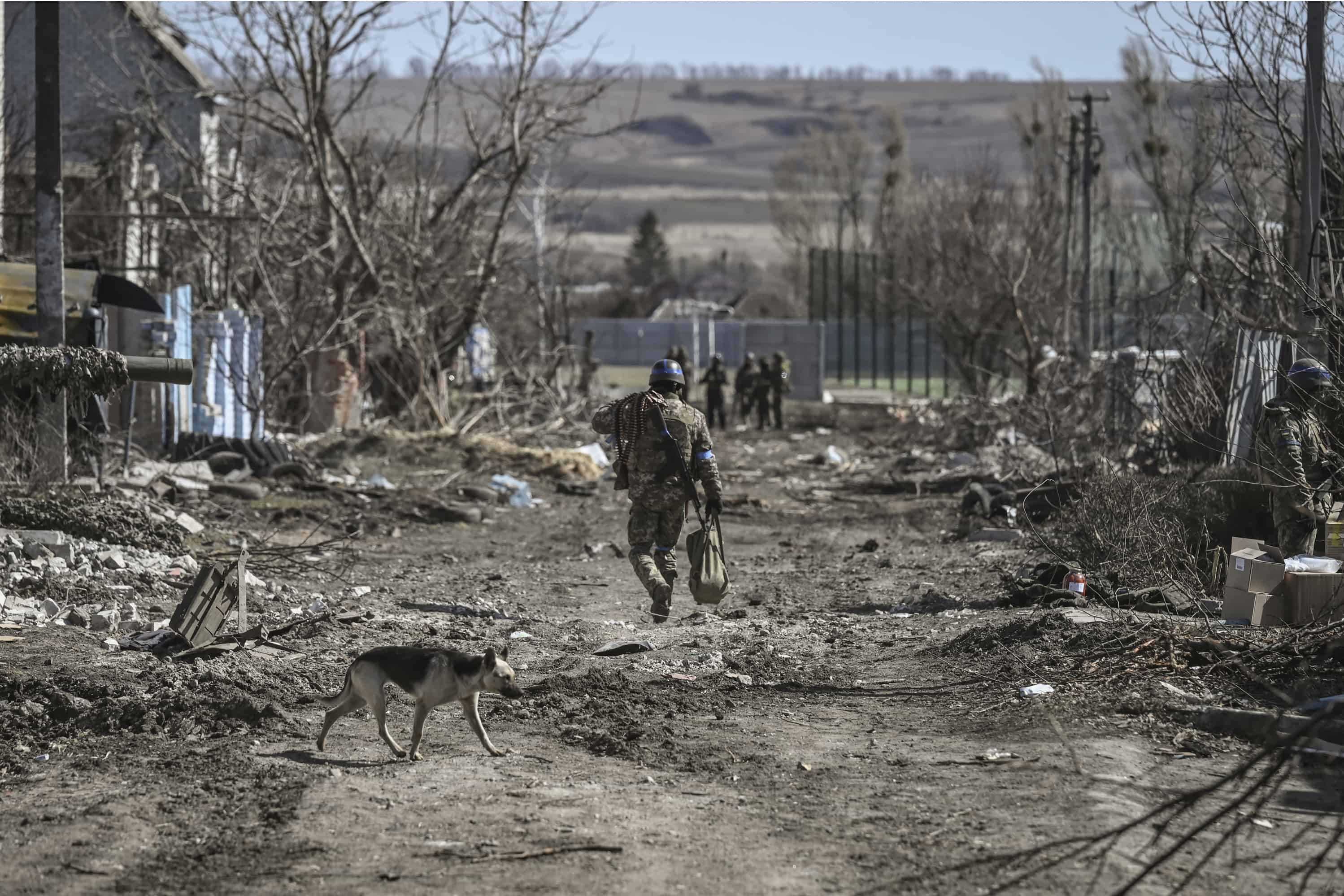 Ukrainian forces recaptured a key Kyiv suburb and desperately clung onto control of the besieged city of Mariupol, as negotiators prepared to meet Russian counterparts for face-to-face talks in Istanbul on Tuesday.

AFP journalists witnessed continued heavy shelling in the area and encountered fleeing residents, who described hellish scenes of bombs raining from the sky and people killed in cold blood while trying to escape.

“We saw those cars which tried to get out on their own, they were crushed by tanks, with people inside,” said 55-year-old Roman Molchanov, his voice cracking with emotion.

His sister added that the “Russian orcs” had “shot dead people sitting in their cars.”

Western experts described the loss of Irpin as a significant setback for Russian forces, who are still trying to regroup and after a failed first attempt to encircle the capital.

It is now more than a month since Russian President Vladimir Putin’s tanks rolled into Ukraine, hoping to cripple or oust the democratic government in Kyiv.

The fighting has already killed an estimated 20,000 people and forced more than 10 million from their homes.

The prospects of a peaceful end to the war — or an imminent victory for either side — appear faint.

Ukrainian and Russian negotiators will resume peace talks on Tuesday, under the shadow of shock allegations that delegates were poisoned at a previous round of negotiations.

Russian oligarch Roman Abramovich and Ukrainian negotiators were said to have been targeted earlier this month, the Wall Street Journal reported, citing people familiar with the matter.

Abramovich — a billionaire businessman under Western sanctions — and the negotiators reportedly developed symptoms including red eyes and peeling skin, though they later recovered.

Ukraine played down the allegations and Foreign Minister Dmytro Kuleba said the Istanbul talks would focus on easing the humanitarian situation, and sounded a note of skepticism about the hopes for success.

“If we see that the mood has changed and they are ready for a serious, substantive conversation and balanced arrangements, then things will move forward,” he said.

“If it is a repetition of their propaganda,” then, he said, talks will again fail.

Putin has demanded the “demilitarization and denazification of Ukraine”, as well as the imposition of neutral status and recognition of the Donbas and Crimea as no longer part of Ukraine.

Kuleba indicated there was little room for agreement there: “We do not trade people, land and sovereignty. Our position is concrete.”

On the battlefield, both sides appear determined to press where they can.

Ukrainian officials still believe that Russia wants to take the capital Kyiv, dismissing suggestions the Kremlin is focused on the eastern Donbas region.

Capturing “Kyiv is essentially a captured Ukraine, and this is their goal,” said deputy defense minister Ganna Malyar, insisting Russia was still “trying to break through the corridor around Kyiv and block transport routes.”

While Ukraine’s forces are counterattacking in the north, they are struggling to retain control of the southern port city of Mariupol.

Russian forces have encircled the city and have embarked on a steady and indiscriminate bombardment, trapping an estimated 160,000 people with little food, water or medicine.

At least 5,000 people have already died, according to one senior Ukrainian official who estimated the real toll may be closer to 10,000 when all the bodies are collected.

“The burials stopped 10 days ago because of continued shelling,” Tetyana Lomakina, a presidential adviser now in charge of humanitarian corridors, told AFP by phone Monday.

Ukraine’s foreign ministry called the situation “catastrophic,” saying Russia’s assault from land, sea and air had turned a city once home to 450,000 people “into dust”.

France, Greece and Turkey are hoping to launch a mass evacuation of civilians from Mariupol within days, according to French President Emmanuel Macron, who is seeking agreement from Putin.

But as the ground war has stalled and Russian casualties have mounted. Moscow appears to have turned to ever-more brutal tactics.

Western powers say they have seen evidence of war crimes, which are already being investigated by the International Criminal Court.

On Monday, Ukraine’s prosecutor general, Iryna Venediktova, said there was proof that Russian forces have used banned cluster bombs in the southern Odessa and Kherson areas.

And Britain’s defense ministry said that private Russian military firm Wagner Group has headed to eastern Ukraine, where “they are expected to deploy more than 1,000 mercenaries, including senior leaders of the organization, to undertake combat operations.”

Reputed to be close to Putin, the Wagner Group and its mercenaries are suspected of widespread abuses in Mali, Libya and Syria.

US President Joe Biden’s has expressed his “moral outrage” at the conduct of the war, and ruffled feathers by suggesting Putin “cannot remain in power”.

He has since denied seeking regime change and swatted away concern that his remarks would ratchet up tensions with Putin.

“I don’t care what he thinks,” Biden said as he proposed $6.9 billion in funding to Ukraine and NATO, and another $1 billion to help counter Moscow’s influence.