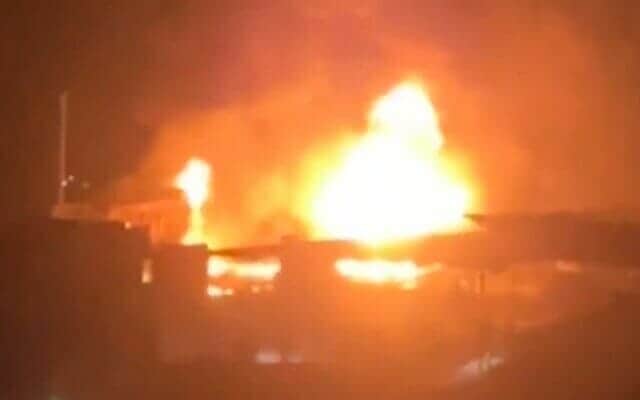 Fire burning in the aftermath of the explosion in a fuel tank in Lebanon. (Twitter pic)

BEIRUT:  At least 20 people were killed when a fuel truck exploded in Lebanon’s northern region of Akkar, the Red Cross said on Sunday.

The cause of the explosion was not immediately clear.

Videos shared on social media showed a large fire at the blast site. AFP could not independently verify the authenticity of the footage.

“Our teams have transported 20 dead bodies and more than 7 injured from the fuel tanker explosion in #Akkar to hospitals in the area,” the Lebanese Red Cross said on Twitter.

Lebanon, hit by a financial crisis branded by the World Bank as one of the planet’s worst since the 1850s, has been grappling with dire fuel shortages for months.

The Lebanese army on Saturday said it seized thousands of liters of gasoline and diesel that distributors were stockpiling at stations across the country.

Fuel shortages have left many with just two hours of electricity a day, while several hospitals have recently warned they may have to close due to power outages.

Lebanon is facing soaring poverty, a plummeting currency and shortages of basic items like medicine.

The Akkar explosion comes less than two weeks after Lebanon marked the first anniversary of a blast at the Beirut port last summer that killed more than 200 people.

On August 4, 2020, a haphazardly stored stock of ammonium nitrate fertilizer exploded and left swathes of the capital looking like a war zone.

It was one of history’s largest non-nuclear explosions.

In the year since, no officials have been held to account for that blast.