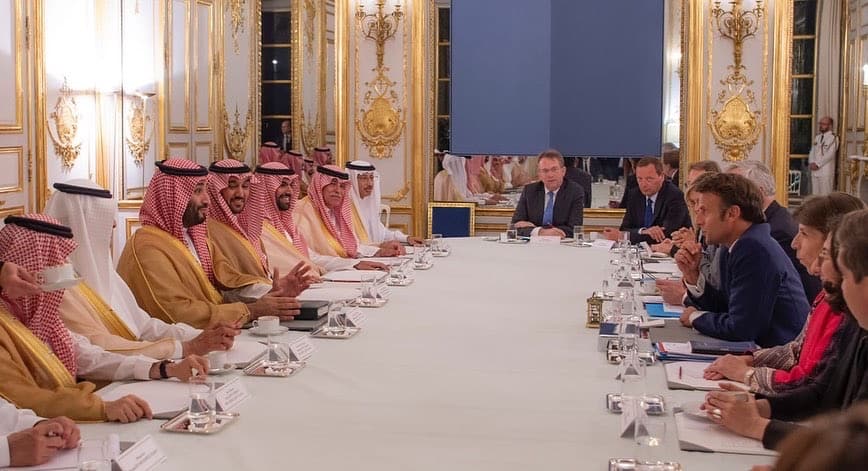 Saudi Crown Prince and the French President held an expanded meeting in the presence of the delegations of the two countries.

France and Saudi Arabia have agreed to boost the partnership between the two countries and continue consultations to face regional and global challenges, said Elysee Friday.

In a statement following the discussions between French President Emmanuel Macron and the Saudi Crown Prince Mohammad bin Salman on Thursday, the Elysee noted that Macron underlined the importance of continuing the coordination initiated with Saudi Arabia with a view to diversifying the energy supplies of European states and presented the FARM initiative for world food security.

The statement also said that the two sides recalled their shared attachment to security and stability in the Middle East and expressed their desire to continue their joint efforts in favor of a lasting easing of tensions.

With regard to Lebanon, the two sides agreed to strengthen their cooperation, in particular within the framework of the joint humanitarian mechanism established following the visit of Macron to Jeddah in December 2021.

Both sides planned to continue to provide support for the benefit of vulnerable populations in Lebanon, it added.

Upon his departure from Paris after wrapping up his official visit to France, Saudi Crown Prince Mohammed bin Salman sent a cable of thanks to the French President Emmanuel Macron.

“The discussions that we had with your Excellency confirmed our common desire to strengthen the strategic partnership between our two friendly countries in all fields, and to work on continuing the coordination and consultation on issues of common interest, under the leadership of the Custodian of the Two Holy Mosques King Salman bin Abdulaziz Al Saud and your Excellency, which aims to achieve the interests of the two countries and their two friendly peoples, and the strengthening of security and stability in the region, he said in the cable of thanks.

On Thursday night, Macron warmly greeted the Saudi Crown Prince ahead of a dinner, with the two men enjoying a warm handshake that they emphasised by using all four hands.

Macron then guided Mohammed bin Salman up the steps on the red carpet into the Elysee Palace.

The Saudi Crown Prince arrived in France following a visit from US President Joe Biden to Riyadh earlier this month. On his way to France, he stopped in Greece this week.

Saudi Crown Prince and the French President held an expanded meeting in the presence of the delegations of the two countries.

The French president first hosted the Saudi Crown Prince in 2018, when he took him to an art exhibition at the Louvre museum, and travelled to the kingdom in December 2021 for further talks.

Mohammed bin Salman stayed overnight at his Louis XIV chateau in Louveciennes west of Paris which he acquired in 2015, according to a source who asked not to be named.