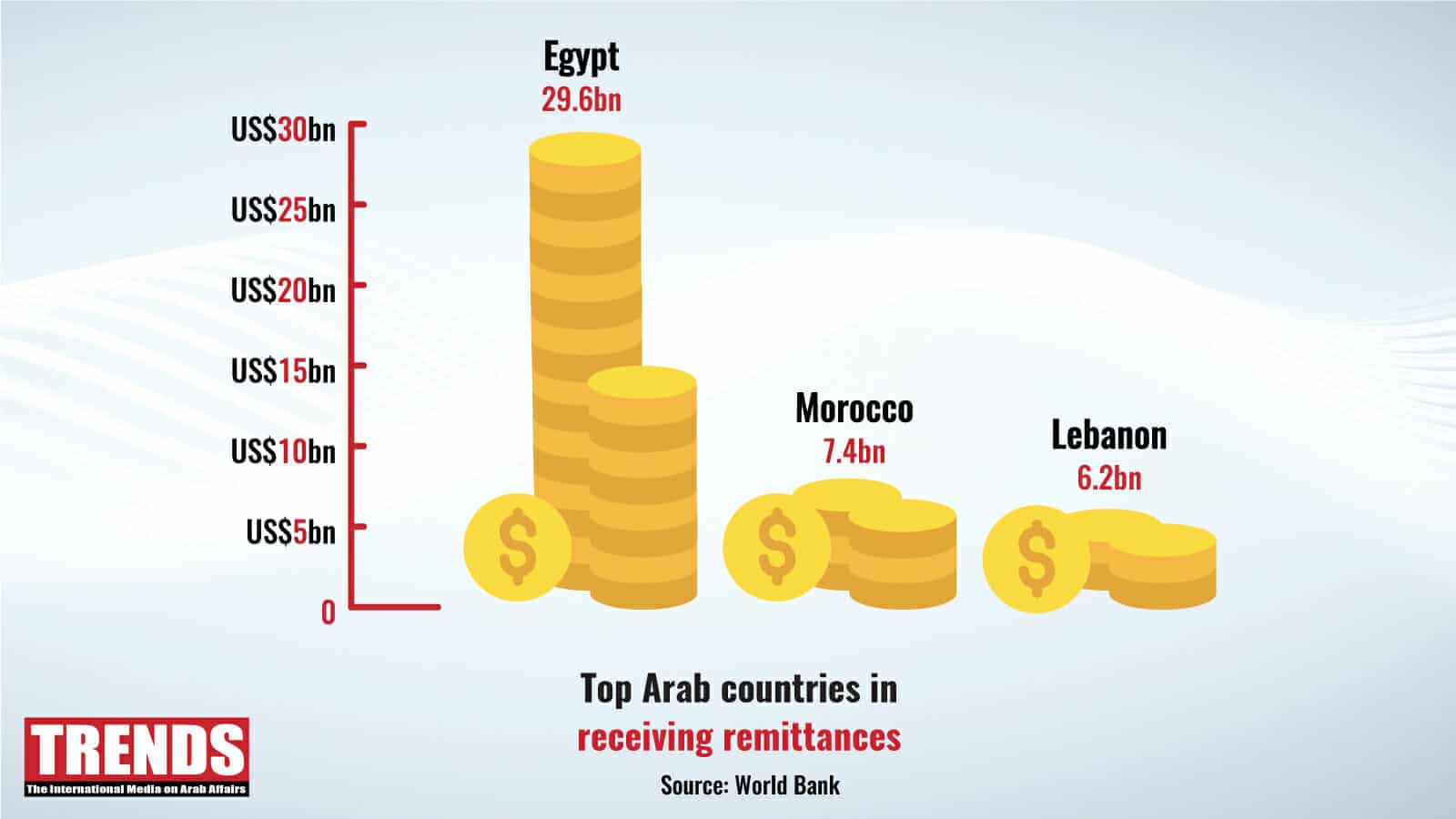 Following the end of the Lebanese Civil War in 1989, waves of emigration from Lebanon spread around the globe. As a result, the so-called “foreign money” generated a secondary economy and contributed to the advancement and support of the social safety net during critical turning points in the country.

Over 2 million Lebanese live overseas. However, due to the economic crisis that Lebanon is witnessing now and the deterioration of the Lebanese pound in value, the number of emigrants increased to over 66,000 in 2019, fell to around 17,000 in 2020, and rose again in 2021, recording about 27,000 in the first five months of 2021.

With the economic crisis reaching its peak in mid-2019, remittances provided a measure of security for thousands of families whose lives were turned upside down by inflation and shortages of essential goods such as fuel, medicine, and food.

According to new World Bank data, Lebanon ranked third in the Arab world in 2020 in receiving remittances from overseas.

Amid its financial crisis, Lebanon received remittances totaling $6.2 billion, according to the estimates.

Egypt was placed first in the Arab world with an incoming amount of $29.6 billion, followed by Morocco, which received $7.4 billion.

Over the last decade, Lebanon has been one of the world’s leading receivers of remittances, with money transfers exceeding one-fifth of the nominal GDP, financial inflows from exports of goods and services, and foreign direct investment.

The global slowdown caused by the spread of Covid-19 and the impact of decreased oil prices in the GCC countries, where over 400,000 Lebanese work and live, are to be blamed for the drop in remittances.

The “true oil of Lebanon” is foreign remittances from the Lebanese diaspora to their families and relatives.

According to Beirut-based money-transfer service OMT, the dollars that entered Lebanon in the first six months of 2021 were 50 percent higher than those during the same time in 2020.

The average value of these transfers in the first six months was about $520 each; half of them were for less than $300, and about 8 percent of transfers worth less than $50 were sent by people with low income in other countries.

It’s worth mentioning that in the past, a Lebanese immigrant might have needed to send $800 per month to their family, but now can transfer $400 because the black-market price for the dollar has increased, despite inflation.

According to the World Bank’s most recent figures, Lebanon is one of the most expensive destinations for remittances.

The Lebanese Central Bank was recently asked to provide $225 million in fuel subsidies till September 2021.

In addition, it is willing to pass a law paying non-bank transactions in US dollars and Lebanese pounds at the exchange rate of the Sayrafa exchange platform.

What does this mean in terms of transfer volume? First, the number of remittances will inevitably decline, as we saw more than a year ago when the central bank decided to seize money at the rate of 3900 Lebanese pounds to the dollar. It would reverse the decision in August 2020.

Moreover, according to a Memorandum 159 issued recently by central bank Governor Riad Salameh, banks can buy foreign currencies immediately transferred from abroad — in fresh dollar accounts — at the market price, but exclusively for medium or long-term investment or to improve liquidity ratios and satisfy obligations.

This ruling authorizes banks to buy dollars from fresh dollar accounts without a customer’s permission, allowing them to confiscate these dollars and pay their value in the Lebanese currency under various pretexts, such as a lack of cash dollars for withdrawals.

From this perspective, we may see a tendency in the coming months of banks and money transfer companies to confiscate dollars received from abroad, resulting in a decline in potential transfers.