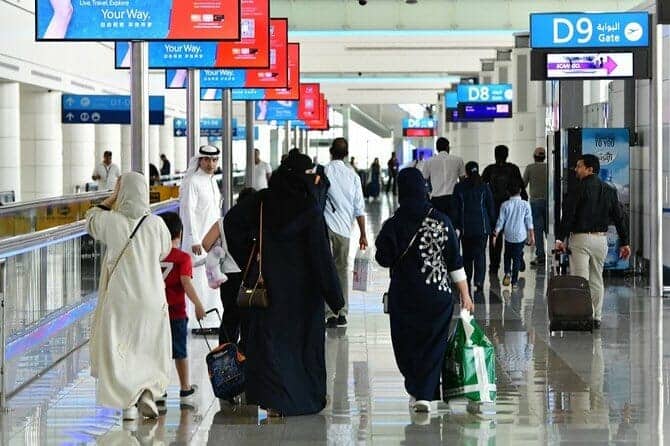 The Gulf Cooperation Council region, owing to its infrastructure, low fuel costs and demographic composition had an edge over other neighboring areas in aviation and airports.

These advantages were one of the reasons for Dubai International Airport (DXB) to earn the distinction of being the world’s busiest airport in June 2021, after the return of air travel and the reopening of borders due to the UAE government’s COVID-19 mass vaccination campaign.

Today, as some countries begin to ease travel restrictions in exchange for higher vaccination rates, the sector is expected to recover and passenger traffic to increase.

According to the Dubai Civil Aviation Authority data, the total number of passengers traveling through Dubai International Airport in the first five months of the year was around 9.9 million passengers.

Despite such huge numbers, reports said that airline capacity at UAE airports is still 60 percent less than before the Covid-19 outbreak.

In late January, the number of passengers in the Middle East was down 56 percent year-on-year. According to OAG, this is a global problem, with airlines such as EasyJet, Ryanair, and Air Canada reducing capacity, but it has a particular sting for Middle Eastern economies that have heavily invested in aviation to help diversify their economies from reliance on oil and gas revenues.

Several airports in the region, on the other hand, have announced plans to expand their airports to meet the expected growth in travel demand.

Terminal 1 and Concourse D at DXB were reopened in June this year, following a partial suspension of operations on March 25, 2020, to restrict the spread of COVID-19 in the country.

This is one of the most significant breakthroughs in the UAE’s aviation, travel, and tourist industries, indicating a return to growth. With the reopening of Terminal 1, more than 40 international airlines will return to their home base.

In Bahrain, the new passenger terminal at Bahrain International Airport was opened June 2021. It covers ​​210,000 sq m and is four times larger than the old building.

This terminal will help the airport extend its capacity to 14 million passengers per year and provide a more advanced and integrated travel experience.

In addition, it is a significant step toward fulfilling the goals of Bahrain’s Economic Vision 2030, which aims to achieve economic diversification and sustainability and a leading position in the aviation sector.

According to Bloomberg News, the Saudi Investment Fund is studying establishing a new airport in Riyadh’s capital to operate as a base for a new airline that the fund plans to launch to boost tourist numbers.

The report said that the project, which is still in the planning stages, could help Saudi Arabia achieve its goal of attracting 100 million tourists annually by 2030.

However, the location of the project and the timeline for its construction have yet to be defined, and the fund may decide not to proceed with these plans.