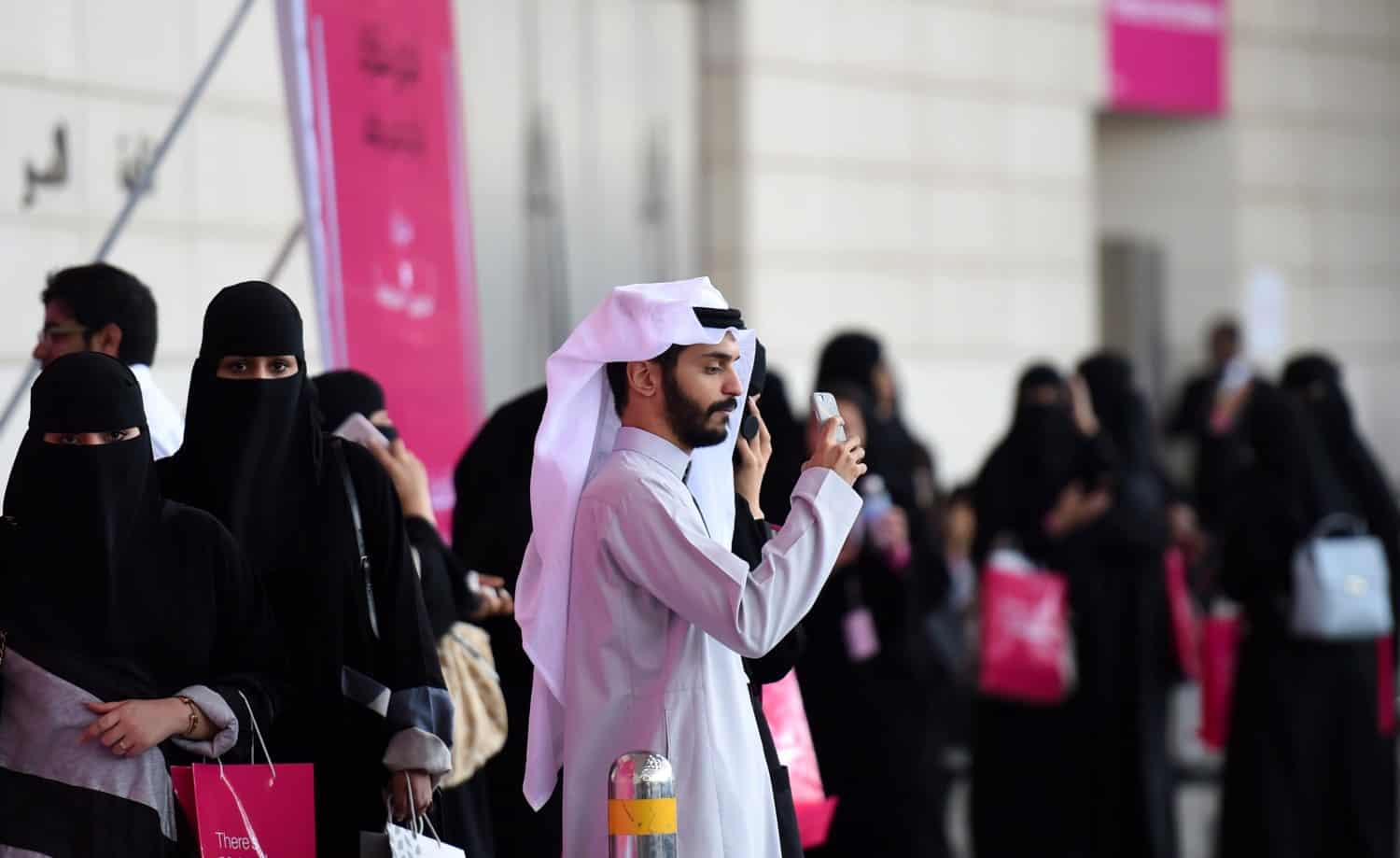 Consumers in the Middle East are using mobile more than ever before and for a broader range of activities. (AFP)

The Mobile-First mindset now rules companies in the Middle East and the rest of the world, and that’s why more and more budgets are directed towards mobile. Despite this trend, PCs and laptops will remain in the lives of many consumers. Under this transformation, cybersecurity and privacy concerns are on the rise.

Recent research found that nine out of 10 UAE organisations now offer mobile apps to their customers. In addition, nearly 66 percent of enterprises strongly identify themselves as mobile-first. With an average of 40 percent of sales taking place on mobile, a growing number of enterprise-sized brands see mobile as a highly strategic acquisition and retention channel.

Speaking to TRENDS, technology specialists said that consumers are using mobile more than ever before and for a broader range of activities, whether online shopping, banking, gaming, watching TV, taking a yoga class, and so much more.

So things are definitely trending in the right direction. However, it’s not just about having a mobile app, it’s also about delivering an exceptional user experience and being able to integrate mobile with any other channels seamlessly.

Samer Saad, Regional Manager – Middle East, AppsFlyer, said, “What’s clear is that any business that’s lagging behind on their mobile strategy will struggle to win-over new customers and retain existing ones going forward.”

Giving his point of view, Charbel Khneisser, VP Solutions Engineering, EMEA at Riverbed, said, “This transformation is ultimately being driven by customers. So, organisations that recognise the trend and embrace this evolution will stand to make significant gains, whilst others who don’t cater to the demand for a mobile-first mindset could see a decline in their customer base.”

Samer Saad said, “One of the biggest shortcomings companies make is viewing the mobile app as separate from other channels. In reality, most customers will interact with your brand in a variety of different ways, and they expect the overall experience to be consistent and relevant throughout.

“For example, if you run a promotional campaign on TikTok advertising 10 percent off a brand of trainers if bought within the app, the consumer should either be taken directly to the relevant point within the app if they already have it installed or to the app store to download the app if they don’t. If the customer is instead taken to the homepage and then has to navigate their way to the specific page they’re interested in, they’ll likely drop off the process.”

The best way to improve the customer experience on a mobile app is to understand how people are using the app, to begin with. For example, are they installing the app but then dropping it off in the sign-up process? Are they putting items into their basket but then not making payments? These insights can give a strong indication as to where companies can make improvements.

Pointing out another mistake, he said, “We frequently see companies focusing too much on acquiring users and less on engagement and building loyalty with existing app customers. Installs are a great metric to measure, but they only tell part of the story.”

Charbel Khneisser explained that while most regional organisations understand that customer and employee experiences on digital applications are paramount, there is a tendency to confuse user-friendliness with user experience. In other words, app designers too often focus on the look and feel of their product and its functionality rather than the backend performance. While it is fair to say that form and function are what attract a user to an app, performance, if poor, can easily drive them away.”

Khneisser added, “Performance, therefore, should be seen as just as integral to the delivery of flawless experiences in a mobile-first world as aesthetics and user options. But just as would-be digital businesses come to this realisation, they discover that caring about performance is a lot more straightforward than delivering it.”

The best way to improve the customer experience on a mobile app is to understand how people are using the app, to begin with. For example, are they installing the app but then dropping it off in the sign-up process? Are they putting items into their basket but then not making payments? These insights can give a strong indication as to where companies can make improvements.

Among experts, it is widely accepted that the first step towards resolving performance issues is to gain visibility of the IT environment. The critical ability to spot issues as they occur and to understand their dependencies, which is what sets IT teams on the road to delivering flawless experiences.

The budget allocated to the mobile framework

Samer Saad of AppsFlyer said that it’s hard to give an exact number about the budget allocated to the mobile framework of a business, as this will vary from company to company.

Saad said, “A mobile-first app will obviously spend significantly more on their mobile framework than a traditional retailer that’s just getting started with their mobile journey.

“However, what’s clear is that we’re seeing more and more budgets directed towards mobile, whether in terms of app development or marketing. In terms of marketing, nearly all respondents in a recent survey of 250 businesses in the UAE and Saudi Arabia intended to increase their spending on mobile marketing by at least a small amount, with 18 percent intending a very large increase.”

Privacy has been a hot topic for mobile marketers, especially since Apple’s iOS 14.5 update, which means people have to proactively opt-in to sharing user-level data – namely Apple’s Identifier for Advertisers (IDFA) – with advertisers. While this is a welcome move from a privacy perspective, it has had implications on how marketers measure the success of their mobile marketing campaigns. One year on from Apple’s changes, 52 percent of consumers in the UAE were choosing to opt-in to sharing data with non-gaming apps, a figure significantly less than what marketers would have been used to.

Since the changes were introduced, there have been a number of privacy-first changes to mobile measurement. Firstly, it’s become clear that measurement doesn’t have to be based on user-level data. Feedback in a certain level of aggregation is enough, and this is something that more and more marketers are embracing.

Samer Saad said, “We’re also seeing the rise of data clean rooms within the ecosystem, which allow brands and partners to share data and gain mutual insights while still preserving the privacy of their users by not sharing any personally identifiable information or raw data with one another.”

Charbel Khneisser said, “Today, cybersecurity and privacy concerns are key challenges to any kind of digital strategy, whether it be mobile-first, cloud-first or other. At the heart of the cybersecurity, challenge is the question of how organisations can secure access and make sure backend systems are always available and accessible while simultaneously maintaining a high level of confidentiality and integrity of the information processed.”

He added: “I would say privacy concerns are on the rise leading to a need for businesses to be more transparent and honest regarding the data being gathered by their mobile apps, and what personally identifiable information (PII) is collected from customers without their knowledge or consent. Even though more permissions associated with mobile apps today are set to restrict access, we are still far behind from a regulatory standpoint on a global level.”

The death of PCs and laptops after Web 3.0

Web 3.0 will be blockchain-based, crypto-enabled and AI-powered. The purpose of empowering Web 3.0 with AI is to provide faster, more relevant data to end users while searching or browsing sites to show data that matters to them.

Charbel Khneisser said, “Understanding what Web 3.0 is about will help organisations understand that it wasn’t made to replace PCs or laptops, but rather to open more opportunities to leverage Decentralised Finance, NFT’s, Decentralised Apps and more. In doing so, this will bring a new Internet era that is more transparent, accessible, and inclusive.”

Samer Saad said, “While Web 3.0 will certainly be enabled by hand-held devices like mobile, this certainly doesn’t mean the death of traditional PCs and laptops. These technologies will still have their place in the lives of many consumers, which is why marketers should ensure any mobile strategy is integrated with them, as opposed to keeping separate.”