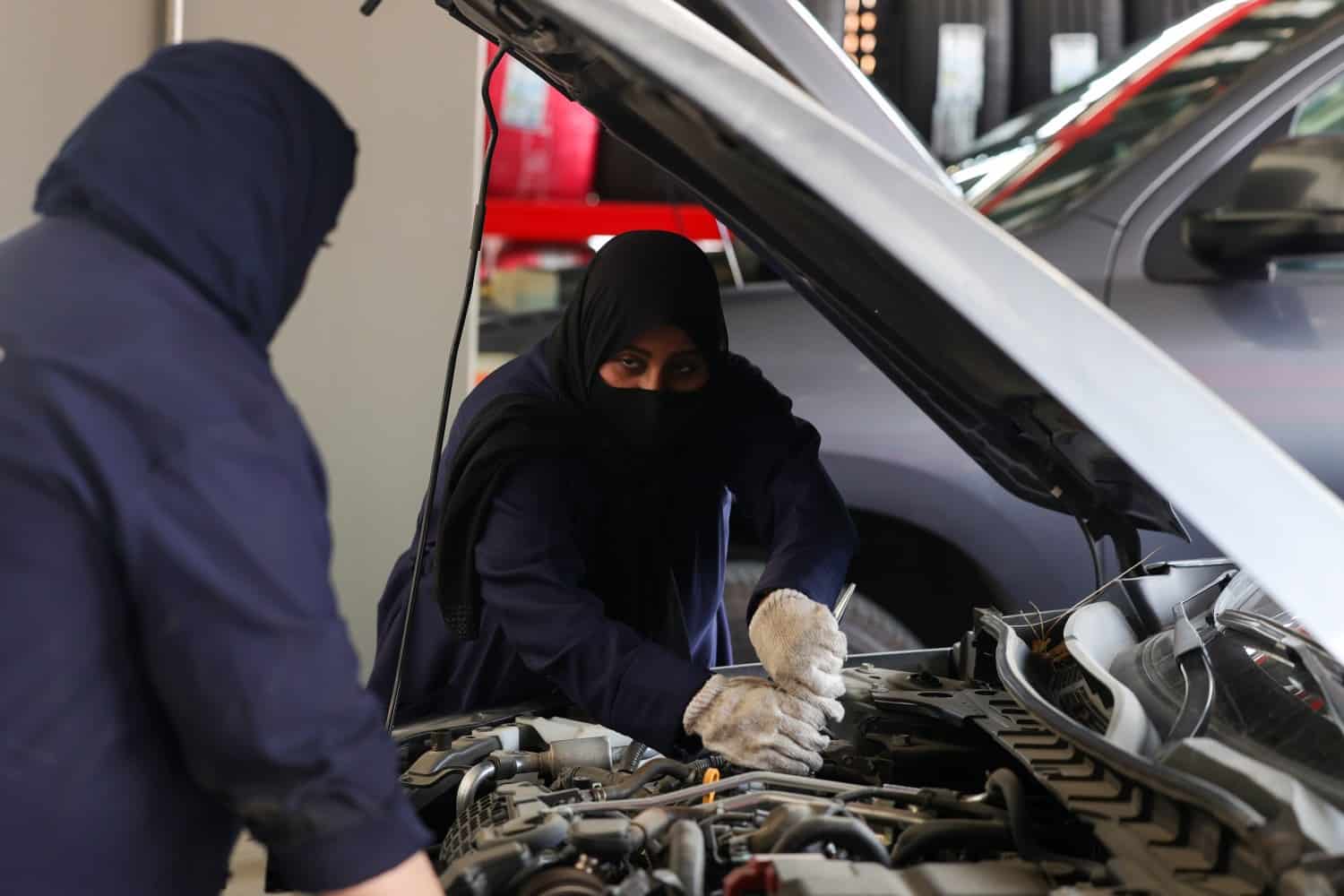 Women mechanics at work in an auto service garage in Jeddah. Saudi Arabia will invest over $133 billion in transport sector by 2030. (AFP)

Services contributed 42 percent of Saudi GDP at constant prices in 2021, the highest in 36 years, according to a report in the local newspaper Al-Eqtisadiah, showing the sector’s increasing role in diversifying the oil-rich kingdom’s economy.

The sector is expected to grow rapidly once the major tourism and entertainment projects –  Qiddiya, the Red Sea project, NEOM,  Al-Ula – announced in the kingdom’s Vision 2030 are completed.

The government accounted for 34.6 percent of total sector output, followed by money, insurance, real estate, and business services at 25.4 percent, and wholesale and retail trade, restaurants, and hotels at 21.8 percent.

According to Saudi Statistics Authority data, the fourth contributor was “Transportation, Storage, Information and Communications,” with a share of 13.9 percent, whereas household services provided to families, including education, health, care, sports, entertainment, and others, ranked fifth with a share of 4.3 percent.

The communications and information technology is one of the most important contributors to the Saudi services sector, and its share in the Saudi GDP in 2021 was US$39 billion.

This contribution is predicted to reach the US $53 billion this year, according to a report provided by the Research and Information Center of the Chamber of Commerce and Industry in Saudi Arabia.

The Saudi Ministry of Communications and Information Technology wants to increase the proportion of the digital economy in GDP to more than 19 percent in the future years, up from 5.48 percent in 2021.

Luxury hotels are a major contributor to the services sector’s growth, making up  US$23 billion of the kingdom’s GDP. According to the hotel data company, STR, the kingdom’s hospitality sector has registered the quickest growth among the world’s 50 most populous countries in 2021.

The report noted that this growth is part of the country’s Vision 2030 project, which seeks to tap 100 million visitors each year by the end of the current decade.

Once new tourism projects are completed over the next 2-3 years, Saudi Arabia is predicted to see a tremendous 67.1 percent increase in room availability.

The Saudi service sector is one of the most labor-intensive industries, so its development helps tide over the unemployment.

According to the figures released by the Saudi General Authority for Statistics in March, the kingdom’s unemployment rate fell to 11 percent by the end of 2021, down from 11.3 percent in the third quarter of the same year.

Saudi Arabia plans to cut the unemployment rate to between 7 and 4 percent by 2030, with the tourist sector alone creating 3 million jobs.