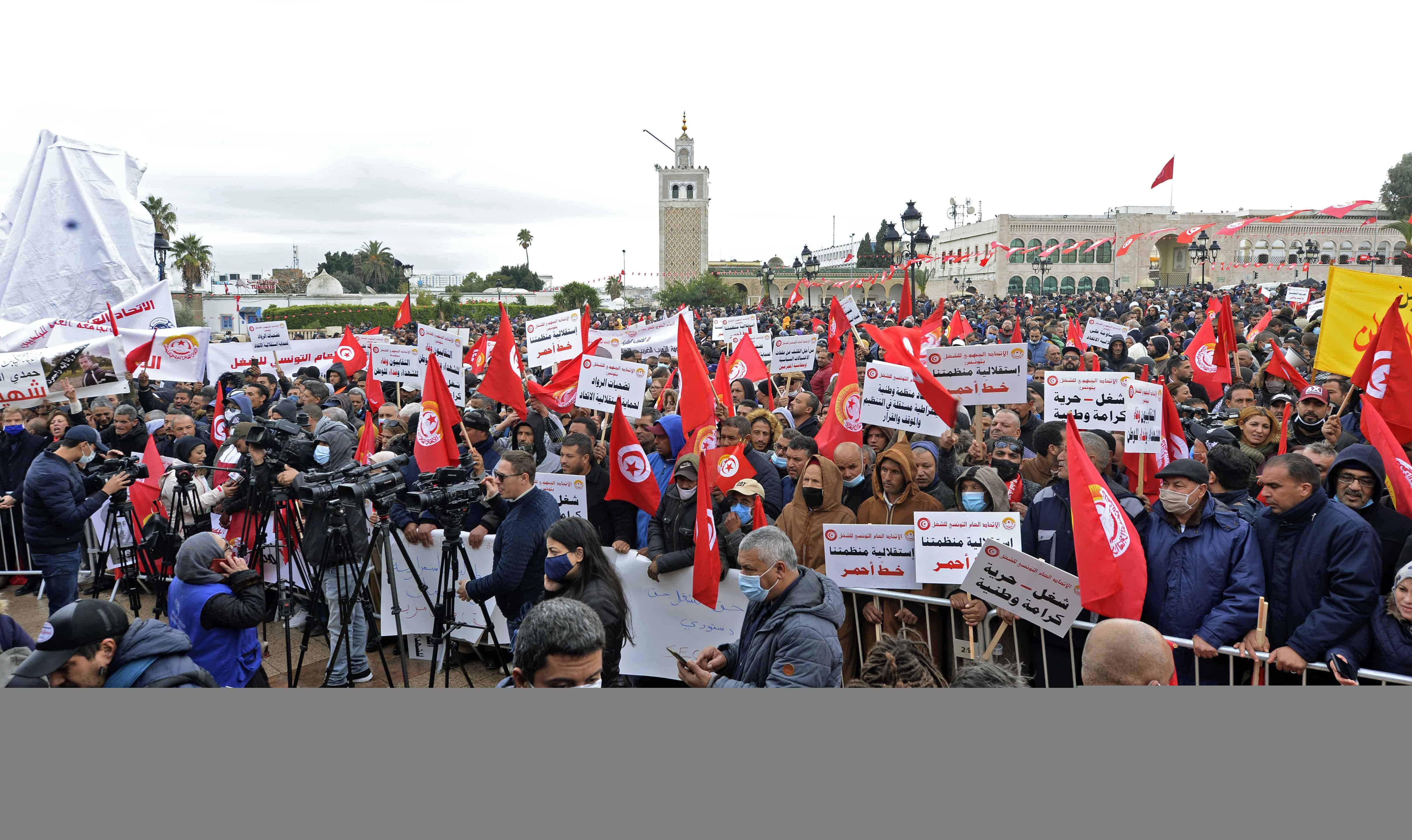 Demonstrators take part in a rally outside the headquarters of the Tunisian General Labor Union. (AFP)

In a statement on Wednesday, the UGTT union said workers would “hold this strike to defend their economic and social rights after the dithering of the government in the face of their legitimate demands”.

Employment Minister Nasreddine Nsibi said the government reserved the right to “requisition” some workers to allow essential services to operate.

While the union insists the strike is not political, it comes as President Kais Saied faces intense criticism for excluding opposition forces from his “national dialogue” part of a push to overhaul the Tunisian state and consolidate an ongoing power grab.

The president sacked the government and suspended an elected parliament in July last year, before dissolving the legislature in March and sacking scores of judges by decree early this month.

The UGTT was invited to take part in the national dialogue, but refused on the grounds that key political forces were not. It also argued that the process aimed to push through “conclusions decided unilaterally in advance”.

The union, a co-laureate of the Nobel Peace Prize for its efforts in a previous national dialogue in the wake of Tunisia’s 2011 revolution, had originally backed Saied when he sacked the government and suspended parliament.

But it has become increasingly critical as Saied has extended his power grab, which some of his rivals describe as a coup in the only democracy to emerge from the 2011 Arab uprisings.

Tunisians are facing soaring inflation and the UGTT has demanded a new deal to boost public salaries, including retroactively for last year, despite deep public debt.

While its opponents say the union is ignoring the country’s deep financial woes, the UGTT’s leverage is boosted by the government needing its support to access an International Monetary Fund bailout.

The government has presented a reform plan to the global lender which includes a freeze on the public sector wage bill, progressive cuts to some subsidies and a restructuring of publicly owned companies.

But the UGTT, which has warned against “painful reforms” aimed at pleasing the IMF, has demanded guarantees that public companies including some monopolies will be spared privatization.

In late May, ratings agency Fitch said tensions between the union and the government were threatening negotiations and warned it would be hard to push through reforms without UGTT backing.