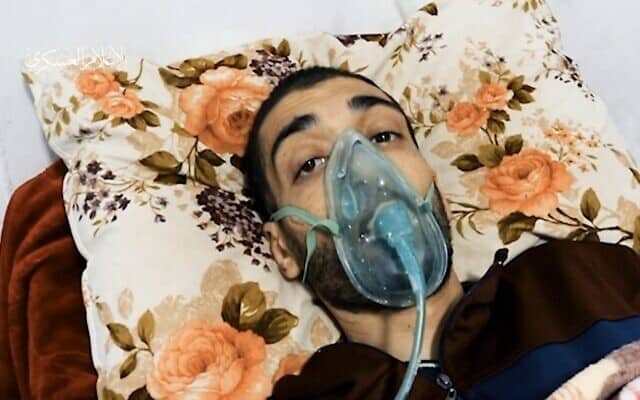 An Israeli detainee in Gaza is shown in a video published by Hamas. Twitter photo

Gaza’s Islamist rulers Hamas on Tuesday published a video of an Israeli Arab detained for seven years in the Palestinian enclave and considered unwell by Israel.

Hamas alleges detainee Hisham al-Sayed, 34, is an Israeli soldier but both the Jewish state and his family say he is mentally unstable.

Human Rights Watch, which has previously condemned his “unlawful detention”, says he was seen entering Gaza by surveillance systems in April 2015.

In the video published by Hamas’s armed wing the Al-Qassam Brigades, Sayed is seen lying on a bed and attached to a ventilator.

The video, broadcast on messaging app Telegram, also shows a close-up of his Israeli identity card.

The previous evening, Hamas’ armed wing had made reference to a “deterioration in the health of an enemy prisoner” and said it would soon publish more details.

The video shows a television next to Sayed broadcasting images by Al Jazeera of an economic conference held on June 21 in Doha.

“Distributing a video of an ill person is abhorrent and deplorable,” said a statement released by Israeli Prime Minister Naftali Bennett’s office.

Israel “holds Hamas responsible for the medical state” of captive civilians, the statement said, adding that the group’s actions “prove that it is a cynical and reprehensible terrorist organisation”.

A second Israeli, Avera Mengistu, is believed to be held by Hamas after he was filmed by an Israeli security camera scaling the barrier separating the Jewish state from Gaza in September 2014.

Israel does not allow its citizens to enter Gaza, for fear of kidnap.

Israeli authorities continue to seek the repatriation of the two men, along with the remains of two Israeli soldiers, Bennett’s office said on Tuesday.

Gaza’s 2.3 million residents have been under Israeli blockade since 2007, and Hamas has fought four wars with the Jewish state in the past 15 years.