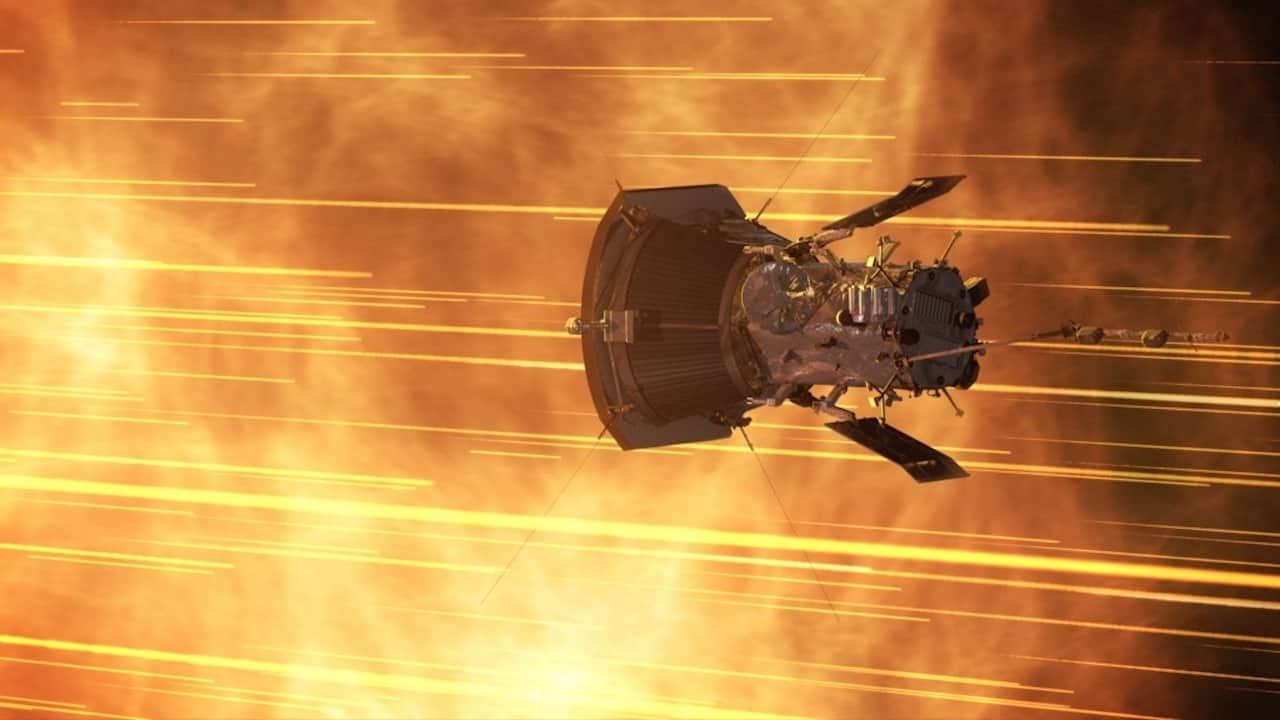 The Parker Solar Probe is a NASA space probe launched in 2018 with the mission of making observations of the outer corona of the Sun. (NASA)

Move over Icarus, the Greek mythological character who fell to his death because the sun melted the wax in his wings when he flew too close to it.

It is time for the spotlight to shine on Nour Raouafi, with whose help the Parker Space Probe launched by the US National Aeronautics and Space Administration (NASA) has “touched the sun.”

The path to success and pride that this Tunisian astrophysicist forged for his country and the Arab world was not easy.

His journey in the realm of astrophysics was one full of hurdles and challenges that he rapidly got addicted to and could not separate himself from.

Besides being the project scientist for the Parker Solar Probe mission, Nour E Raouafi is also a senior scientist at Johns Hopkins University’s Applied Physics Laboratory.

In December 2000, he received his PhD in Astrophysics at the University of Paris XI, Orsay, France, before heading to the Max Planck Institute for Solar System Study in Göttingen, Germany, where he continued his broad research in solar physics and heliophysics from 2002 to 2005.

In 2005, he relocated to the United States, where he worked for four years at the National Solar Observatory.

Then, in December 2008, he moved to the Johns Hopkins Applied Physics Lab.

He continued his successful journey by joining the NASA team as a project scientist in the Parker Solar Probe mission, one of the most exciting missions NASA has ever undertaken.

In an exclusive interview with TRENDS, Raouafi described his journey as “fascinating.”

“You always plan what you want to do, but life always surprises you,” he said.

“Many of the occurrences in my career thus far were not planned in the way they are now.”

“Having an easy journey is not the right thing,” he continued.

“If it was simple, other people would have done it by now,” he said.

“However, I enjoy and thrive on challenges and difficulties, and I like pressure because it indicates that what we are doing is exciting.”

He went on to say that his personal challenges included leaving his country and family so young, but on the professional side, confronting daily challenges is essential since he is primarily a problem solver. “It is the nature of my work.”

On December 19, NASA announced that the spacecraft of the Parker Solar Probe mission had officially “touched” the sun, plunging through the unexplored solar atmosphere known as the corona.

According to Raouafi, the corona appeared dustier than expected.

Future coronal excursions will benefit scientists in better understanding solar winds’ origins and how they are heated and pushed into space, he said.

“The corona is where the action occurs because the sun lacks a solid surface; studying this magnetically intense region up close will help scientists better comprehend solar outbursts that potentially disrupt life on Earth.”

Although he does not define himself as a Mars person, he said what the UAE accomplished with its Hope probe was incredible and a huge success.

He said that what was eye-catching and encouraging was seeing the desire to do more.

“The good news is that we’re moving, which is incredibly heartwarming. It’s a wonderful thing.”

He continued: “Some people may believe that going into space and exploring it is a luxury. In fact, it isn’t. We rely on space to survive. Many economic, societal, and technical developments will be unavailable if we do not go there. We must recognize that space is the future of humanity.”

The UAE established the Arab Space Cooperation Group in 2019 to enhance knowledge, technical expertise, experiences, and information exchange, and to encourage scientific research and innovation to develop advanced space capabilities.

However, due to a lack of resources and programs, only two countries are forging ahead in space sciences, with other countries struggling to catch up.

“We can’t achieve much without collaboration,” said Raouafi.

“I understand that countries like the UAE, Saudi Arabia, and others are setting the pace in some ways because they have resources and programs in the works, but these resources should be available and shared with the rest of the Arab world, and countries should help each other to catch up.”

He went on to say: “Collaboration is quite important. By pooling our efforts, we can overcome huge difficulties and achieve big things on our own, much like the European Space Agency.”

Raouafi emphasized: “We shouldn’t compare ourselves to the world’s top agencies. These have been around for decades, and they invested a lot of time and faced many obstacles initially. However, they persevered, and they succeeded.”

He explained: “For us, it’s the same. If we have problems, we should overcome them, and we can only move forward if we want to. Remember that working with other large agencies can be pretty advantageous. We must remain open to the Arab world and other countries since we cannot progress alone.”

Lastly, Raouafi advised countries to invest in youth because it is the finest investment for the future.

His advice to young people interested in space science research was to push themselves and keep their aspirations big and ambitious.

“Everything is determined by ambition. You will reach the moon if you have ambitions to do so”.

He also underlined the need to open up and learn from others, including the youngest.

Another crucial factor he stressed was optimism.

“Even at the most challenging moments, you must maintain a good attitude. Always focus on the positive things since it motivates you to keep moving forward.”