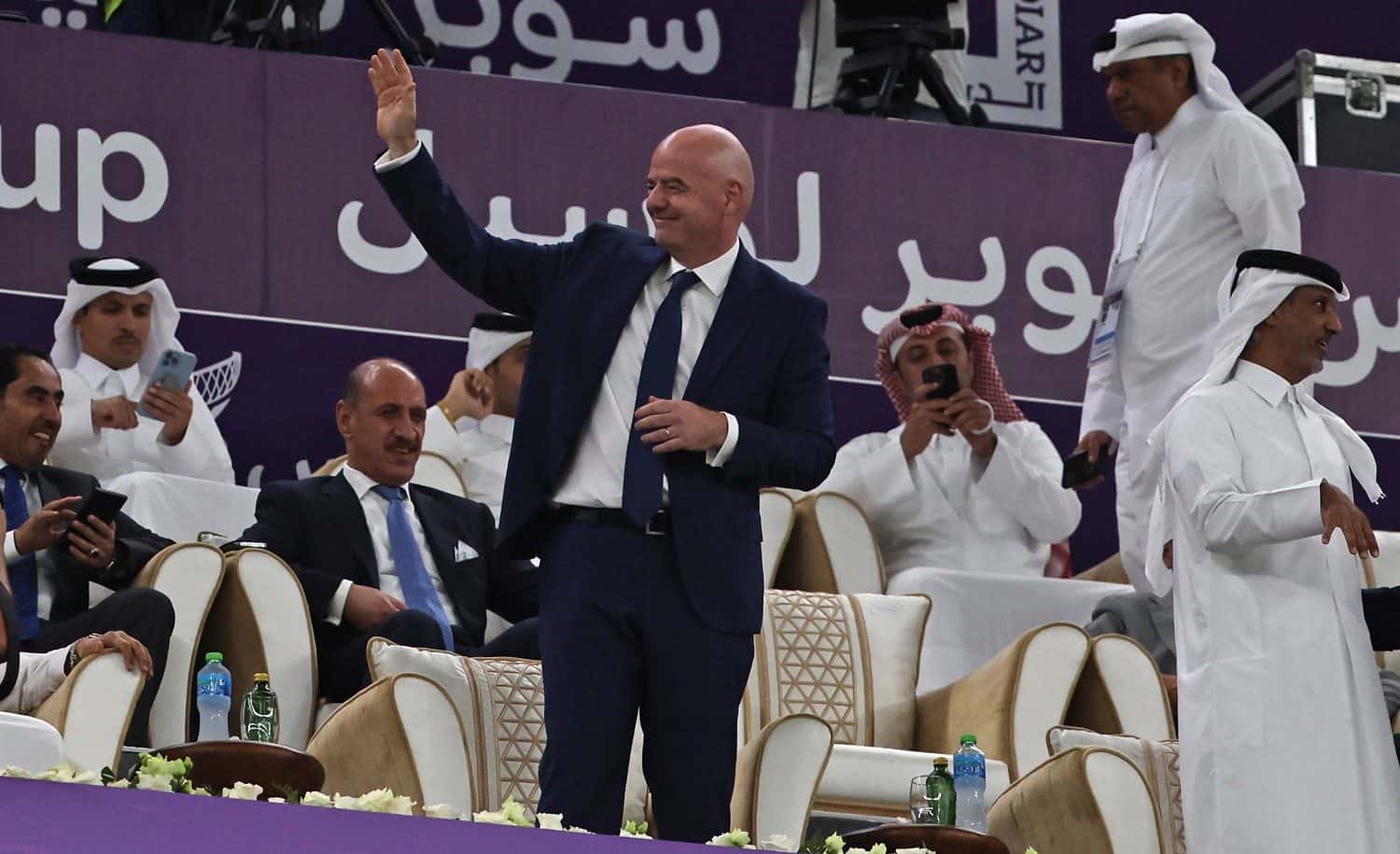 FIFA President Gianni Infantino at Lusail Stadium in Qatar. The Gulf countries are likely to benefit from the millions of fans visiting Qatar to attend the World Cup. (AFP)

With the beginning of the Qatar World Cup 2022, the Gulf region will be on a date to welcome millions of people from all over the world, which will boost tourism to the country, and the GCC countries in general.

The World Cup is expected to increase revenues for Gulf airlines, hotel and restaurant industries, and domestic transportation.

Multiple Gulf airlines will transport supporters from their nations to Qatar, and the Gulf states have promised to facilitate administrative procedures for fans passing through their territories.

As part of the World Cup transport deal, Qatar Airways CEO Akbar al-Baker had previously indicated that Gulf airlines would collaborate with Qatar Airways during the 2022 World Cup.

The Saudi Ministry of Foreign Affairs declared that the kingdom would welcome all holders of the “Haya” card, which is issued for fans of the 2022 World Cup.

Saudi Arabia stated that it would give all Haya card users multiple entry visas to entice visitors and revitalize the Gulf kingdom’s tourist and hospitality sectors.

It added that holders of the visa could reside in the kingdom for 60 days, noting that it allows entry into and exit from the kingdom several times during the visa’s validity period.

The government intends to benefit economically from the significant number of World Cup fans, revitalize its tourist and hospitality sectors and diversify its income sources away from oil.

The “Haya” card represents the Supreme Committee, which organizes the World Cup in Qatar. It is the only way for all fans, both citizens and residents, as well as international, to enter Qatar during the World Cup 2022.

The card will be activated from September 6 to 11 to attend the Super Lusail Cup match (which brings together the champions of Saudi Arabia and Egypt) and from November 1 to December 23 next to enter Qatar, allowing supporters to remain until January 23.

The Gulf countries will likely benefit from the millions of fans who will arrive in Qatar to attend the World Cup, especially since the GCC countries are close to each other, and traveling between them will not be cost-prohibitive.

The hotel prices in the kingdom’s east began to rise at an unprecedented rate during reservations for the period around the start of the World Cup.

According to the Saudi newspaper Al-Youm, hotel prices in Al-Ahsa province, around 300 kilometers from the Qatari border, increased by about 700% over the summer preceding the World Cup.

Moreover, Saudi Arabia has also begun the trial operation of the passenger section at the new Salwa port, which connects the kingdom with Qatar, after increasing its capacity sixfold.

According to the Saudi Press Agency “SPA,” the Governor of the Eastern Province, Saud bin Nayef bin Abdulaziz, stated that the port would help to improve the flow of vehicles and travelers, as well as the volume of commercial exchange and economic links between the two countries.

Furthermore, Saudi Airlines also signed a deal with Qatar Airways last May to provide an easy and convenient travel experience for people wishing to attend the games to boost tourism during the World Cup.

Travelers from all over the world will be able to combine visiting the kingdom’s most famous landmarks with local historical and cultural heritage in various Saudi cities, which will host many tourism and entertainment events during that period.

It’s worth noting that Saudi Arabia has established a tourism development strategy with the aiming to receive 400,000 tourists yearly, create 4,200 jobs, and raise $95,948 million in revenue.

The kingdom also intends to invest more than a trillion dollars in tourism over the next ten years, constructing airports to accommodate non-religious visitors and new hotels.

A Bloomberg report predicted that, in addition to Saudi Arabia, Dubai would benefit the most from the expected tourism boom in the Middle East against the backdrop of the World Cup.

According to the article, Qatar is scheduled to accommodate more than one million World Cup visitors, but many will not reside in Qatar during those games.

It noted that, as a result, the alternative possibilities for staying during the events would logically differ from the UAE, Saudi Arabia, and Oman.

The report said that Dubai appears to be the best prepared of the region’s locations for travelers to gain from this event.

It has also announced the issuance of multiple-entry tourist visas to the fans traveling to Qatar, as holders of the “Haya” card for Qatar World Cup fans will be able to obtain a permit to enter and remain in the UAE for up to ninety days for $27, with the option of extending for another 90 days.

The report also stated that Dubai was well prepared to capitalize on this event, as it has built a new hotel in the “Palm Jumeirah” and allocated it to World Cup visitors who intend to stay in Dubai, depart to Doha to watch the games, and then return to the hotel for an overnight stay.