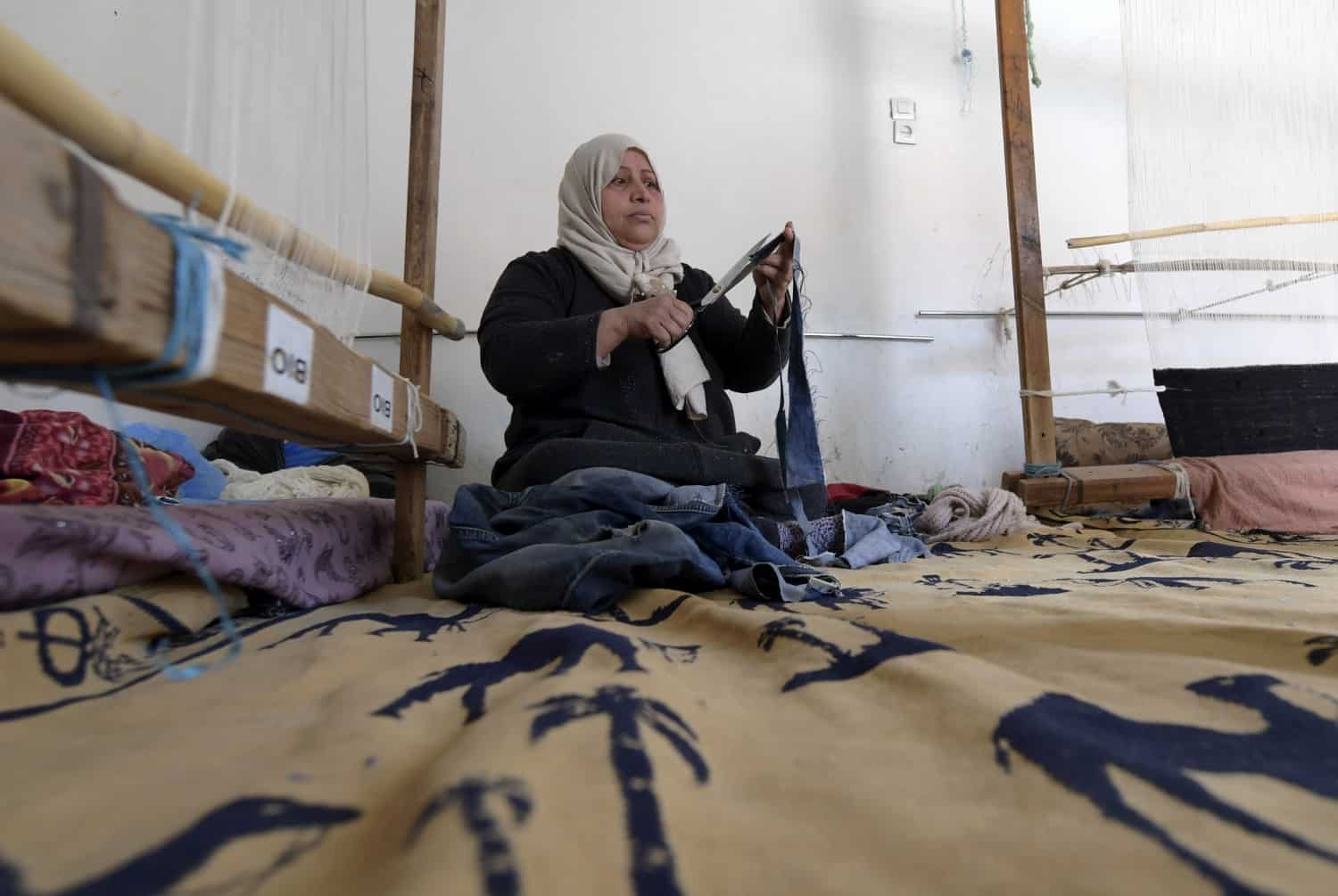 A Tunisian weaver works in the southwestern Tunisian oasis of Nefta. (AFP)

Najet unravels an old pair of jeans, raw material for a designer carpet: traditional, eco-friendly crafts are being adapted for new markets thanks to a project born in the Tunisian desert.

Now, she is making a living from it.

She is selling her Turkish-style kilim rugs via Shanti, a social enterprise that helps artisans from across the North African country reach buyers and bring vital revenue into some of its most marginalised communities.

“Unstitching old jumpers, tearing up old cotton garments, making rugs out of them, it’s a folk art found in all Tunisian homes,” he told AFP.

While the skill “has been around forever”, reaching buyers is a challenge, he added.

Back in 2014, he had asked his aunt to weave carpets for his friends, soon moving to selling them via Facebook.

Seeing the potential, two years later he created Shanti, which buys carpets and takes charge of getting them to consumers.

It also employs designers who work with artisans to improve their design skills and make their products more marketable.

“These are my creations, they come out of my imagination and Shanti approved them,” Najet said.

Najet uses an eclectic array of old pullovers, socks and assorted pass-me-downs from the local flea market, giving them a new life as rugs.

She has little fear of running out of raw materials.

Despite a lean patch, the Tunisian clothes industry still keeps 1,600 firms in business, providing 100 times that many jobs.

In Nefta, a town of some 22,000 people, Shanti has also set up a haberdashery where weavers have free access to balls of wool recycled from second-hand clothes.

Previously, “craftswomen had to go and find materials, which they had to pay for, then earned 12-15 euros for a kilim”.

Now Shanti pays them 40 euros ($43) apiece, up to a maximum of four a month each to avoid pressuring them into overwork.

It then sells them in Tunisia and abroad.

The association also helps the workers improve their work spaces, for example with air conditioning — a necessity in southern Tunisia’s blistering summer heat.

The work has changed the social standing of the women involved.

Najet says she is happy to be making a living from home.

“I don’t have to go out for anything, I can cook and eat here, I can work comfortably.”

Baccouche said at first people teased him for getting involved in “an old ladies’ craft”.

But the project fills a valuable niche in an area where women are disproportionately underemployed, and which has faced an ever-worsening economic crisis since before the revolt that sparked the Arab Spring uprisings of 2011.

“It was important to show that you can be an old woman who never went to school and doesn’t know how to use the internet, but you can still do something and earn a living from it,” he said.

Yet the association also tries to avoid creating conflicts within families.

It pays the women not in cash but in post office accounts where their husbands can’t see how much they are making — or use it to pay household bills.

Using its system of ordering in advance, Shanti runs a boutique in the capital Tunis.

“L’Artisanerie” also acts as a space for coordinators who train artisans from other rural areas, making bamboo furniture, poetry and embroidery.

In four years, more than 200 producers have been able to find a market for their work. Sixty work every day for L’Artisanerie.

“We’re trying to show that you can make something 100 percent Tunisian, with Tunisian materials and skills, but with a design that fits current tastes,” Baccouche said.

Some products, joint creations by artisans and Shanti designers, are sold to design-conscious Tunisians.

Others are exported or sold to bigger firms — such as Indigo, a manufacturer for Zara, or Mango, which recently bought 164 rugs made from recycled jeans.

For now, the system still relies on some support from non-profits such as Oxfam or on Danish development aid.

But Baccouche has big ambitions, with Shanti expanding into sustainable agriculture and eco-tourism.

“We’re trying to set up an entire, eco-friendly production and logistics chain,” he said.