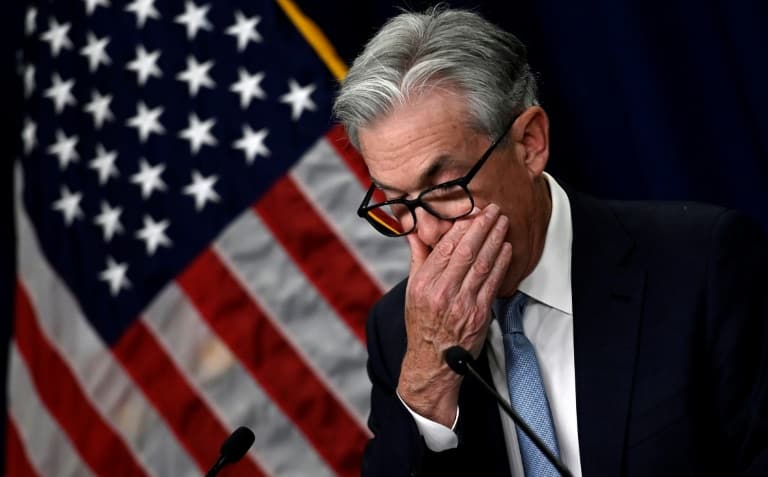 US Federal Reserve Chair Jerome Powell faces a complicated challenge of stamping out inflation without causing too much economic pain. (AFP)

By TRENDS Desk AFP
July 24, 2022 3:17 pm
Share
US central bankers face an increasingly difficult balancing act as they struggle to douse scorching inflation while still keeping the economy growing, though they have made it clear they are willing to risk a recession.
But with war still raging in Ukraine, and Covid-19 causing ongoing issues in Asia, avoiding an economic downturn will require luck and depend on many factors outside the Federal Reserve’s control.
As families struggle to make ends meet amid surging prices for gas, food and housing, and a rising number of Americans take on second jobs to pay the bills, Fed officials have made it clear that fighting inflation is their top priority even if that means inflicting pain.The Fed holds its two-day policy meeting next week, where it is expected to hike the benchmark borrowing rate on Wednesday by another three-quarters of a percentage point in its aggressive campaign to cool demand and ease price pressures.

Despite a healthy job market with near-record low unemployment, workers are seeing their wage gains overwhelmed by sky-high consumer prices that rose by a new 40-year high of 9.1 percent in June.

Slowing the economy is likely to cause more job losses, but policymakers want to avoid at all costs the greater pain of a price spiral that becomes entrenched or spins out of control.

After flooding the world’s largest economy with support during the pandemic zero interest rates and a steady stream of liquidity into the financial system Fed policymakers were congratulating themselves on how quickly the economy recovered, regaining millions of jobs in a matter of months.

But they were caught flat-footed by the rapid run-up in prices, as Americans flush with cash due to massive government aid went on a spending spree, buying up cars, houses and other goods at a time when the global supply chain was still bogged down by pandemic lockdowns that continue in China.

The Fed finally began liftoff taking the policy interest rate off zero in March, starting with a 25-basis-point increase, followed by 50 in May and 75 in June.

Higher lending costs make it more expensive to borrow funds to buy cars and homes or expand businesses, which should cool demand, while also making it more attractive to save rather than spend.

Other major central banks have followed suit, including the European Central Bank that made its first move last week.

Fed Chair Jerome Powell last month said the policy-setting Federal Open Market Committee would consider either a 50 or 75 bps hike at the July meeting, and most economists expect a repeat of the June three-quarter-point increase.

Fed Governor Christopher Waller recently floated the idea of a mammoth 100-bps hike, which would be the first since the US central bank started using the federal funds rate for policy in the early 1990s.

The equivalent amount of tightening in a single move hasn’t been seen since the early 1980s, when then-Fed chief Paul Volcker was on a crusade to crush a wage-price inflationary spiral.

But even Waller noted that it is important not to move too fast, and a full point hike would only be called for if data continue to show accelerating price increases.

But some recent data “indicate that previous rate increases have very likely started to work,” she said in an interview.

Housing prices have skyrocketed, hitting new records repeatedly, even as interest rates have risen, and consumer spending continues to increase, leading some economists to warn of a contraction in the second quarter.

But there are signs of cracks, including falling home sales, a dramatic drop in mortgage applications and an increasing share of spending going to necessities.

Officials have said the US economy is strong enough to withstand higher rates without a serious downturn, but others, including former Treasury secretary Lawrence Summers, say they are overly optimistic and job losses will have to rise sharply in order to tame inflation.

Kohn said it will be important for Powell to communicate clearly about what data the Fed is looking for to slow or pause the rate hike cycle.

“I think a fairly shallow recession,” with higher unemployment than the 3.7 percent the Fed projected last month, “will be necessary to break this inflation spiral,” he said.

“But, boy, the amount of uncertainty around it is just huge.”