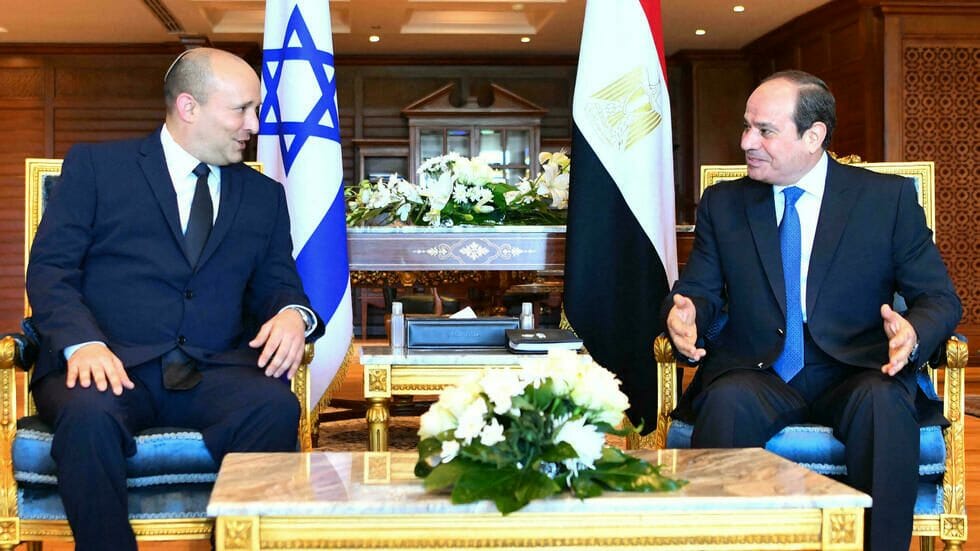 Israel’s Naftali Bennett met Egyptian President Abdel Fattah al-Sisi on Monday, on the first visit to the North African country by a prime minister of the Jewish state in over a decade.

Sisi hosted Bennett in the Red Sea resort of Sharm el-Sheikh where they discussed “efforts to revive the peace process” between the Israelis and Palestinians, presidential spokesman Bassam Radi said.

Security cooperation between the two countries was also discussed at the meeting attended by Egyptian intelligence chief Abbas Kamel and Israel’s National Security Advisor Eyal Holata, according to Radi.

Bennett said before heading back home that the meeting helped create “a foundation for deep ties in the future” between Egypt and Israel.

The talks addressed “a series of issues in the diplomatic, security and economic spheres” and “ways to deepen ties and strengthen the interests of our countries”, he said.

A statement from his office said Bennett also praised Egypt’s “significant role” in bringing security to the Gaza Strip “and in finding a solution to the issue of the (Israeli) captives and missing”.

Egypt was the first Arab country in 1979 to  sign a peace treaty with Israel, after decades of enmity.

In May, it played a key role in brokering a ceasefire between Israel and the Palestinian Islamist group Hamas that rules the Gaza Strip, after 11 days of deadly fighting.

Egypt regularly receives leaders of Hamas as well as of its political rival the Palestinian Authority led by Mahmud Abbas, while maintaining strong diplomatic, security and economic ties with Israel.

But “it won’t happen without the support and involvement of our Egyptian partners and without their ability to talk to everyone involved”, he said.

Bennett’s visit came about 10 days after Abbas was in Cairo for talks with Sisi.

Monday’s talks mark “an important step in light of the growing security and economic relations between the two countries, and their mutual concern over the situation in Gaza”, Cairo-based analyst Nael Shama told AFP.

It also fits with “Egypt’s plans to revive the political talks between Israel and the Palestinian Authority”, he added.

The last meeting between an Egyptian president and an Israeli premier dates back to January 2011, when Hosni Mubarak received Netanyahu, weeks before Mubarak was toppled in a popular revolution.

In the political turbulence that followed, relations between the two countries deteriorated as protests were staged outside the Israeli embassy in Cairo in 2011.

The one-year reign of Egypt’s Islamist president Mohamed Morsi from 2012 also proved to be icy, with Israel suspicious of his Muslim Brotherhood’s close ties to Hamas.

Sisi has again positioned Egypt as a regional bulwark of stability, echoing the frequent peace summits overseen by Mubarak before his ouster.

Israel and Egypt are two of Washington’s main allies in the Middle East and are the largest recipients of US military aid, and they have worked together on security issues.

Sisi, in a 2019 interview on CBS, acknowledged Egypt’s army was working closely with Israel in combating “terrorists” in the restive North Sinai.

He underscored Cairo’s “wide range of cooperation with the Israelis”.

The relationship developed after Egypt regained sovereignty over the Sinai Peninsula, which Israel occupied in the 1967 Six-Day War.

Egyptian forces have for years fought an insurgency in the Sinai, led mainly by a local affiliate of the Islamic State group.

The two neighbours have also deepened their ties in the field of energy. Since last year, Egypt has received natural gas from Israel to liquefy and re-export to Europe.

Popular sentiment on the ground in Egypt, where the 1979 treaty is regarded as a “cold peace”, has toned down from being resolutely hostile towards Israel, amid a more severe crackdown on dissent under Sisi.

Israel last year agreed on normalisation deals with the United Arab Emirates, Bahrain, Morocco and Sudan under the aegis of Donald Trump’s administration.