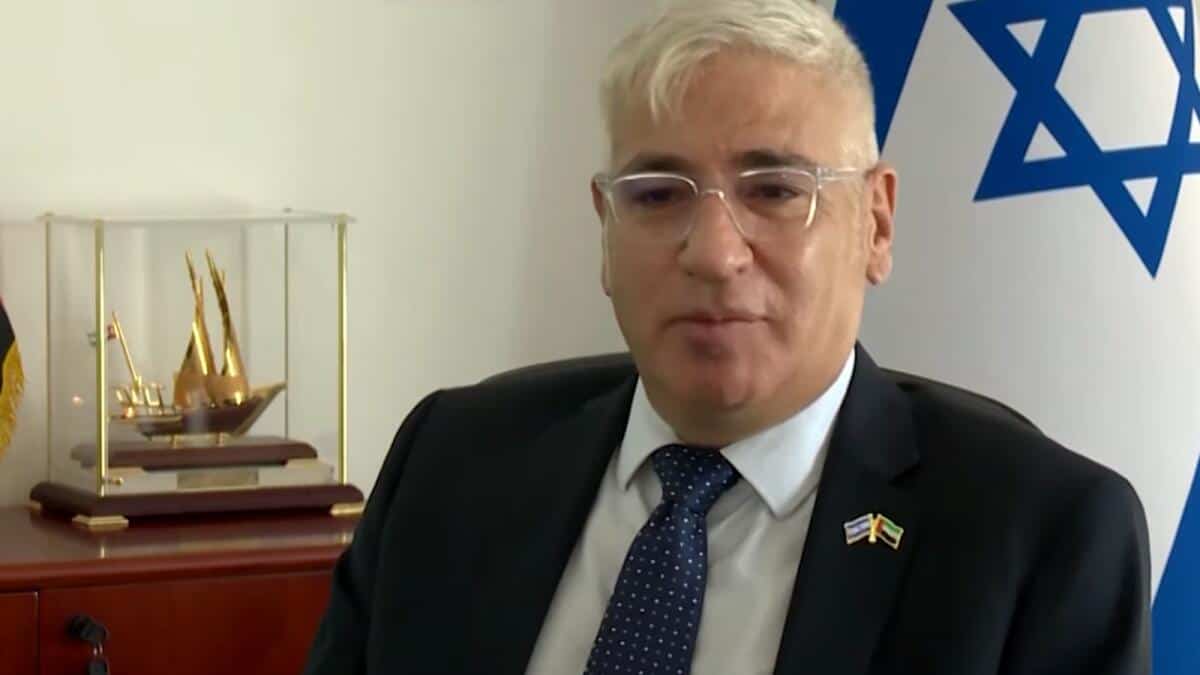 As the bilateral relations have started warming up, Israel’s first ambassador to the UAE, Amir Hayek, is already on the job to further strengthen the bond between the two countries.

Hayek did not rise through the ranks of the foreign ministry to get his high stakes appointment in Abu Dhabi.

Instead he comes from senior public and private sector positions in industry, business  and trade among them head of the Israel manufacturers association, director-general of the ministry of industry and head of the government’s Israel Export Institute.

It is largely because of this experience and also perhaps because of his ties to centrist foreign minister Yair Lapid that he was tapped for what has become one of Israel’s most important postings and began serving in Abu Dhabi three months ago.

Hayek will play a key role in shaping whether official relations that got off to a good start after the Sept 2020 Abraham Accords blossom into an enduring warm peace and do not take on chills and limitations like Israel’s relations with its earlier peace partners Egypt and Jordan.

We have a double responsibility: succeeding in bilateral relations and also succeeding at a level where other countries will say ‘why not us?’ Amir Hayek says

“We are in a marathon, not a sprint, to build ties and infrastructure for the advancement of relations,” Hayek told TRENDS in a wide ranging interview that touched on economic cooperation and also regional affairs, including Israeli policy towards the Palestinians.

Trade between the two countries increased nearly tenfold during the first eleven months of 2021 compared with the previous year to more than a billion dollars and that is just scratching the surface in Hayek’s view. “Very nice, but not enough,” he says. He is an optimist. He forecasts that trade ties will develop to the point of totaling 8-10 billion dollars within five years.

Israel, Hayek said, is looking to grow together with the UAE sectors that have an impact not only on companies but that also benefit society. These include food security, agrotech, healthcare devices, education, fintech and communications

Seeing things through a business lens, Hayek has quickly developed an affinity for the people of his host country. “They are the best partners we could have,” he says of Emiratis. “They are very smart, very experienced, they very much know what they want. Look at the country, at its founders and leaders. They know how to build strategy, draw the plan and primarily execute.”

The two countries are on track to finish negotiations on a Free Trade Agreement by March or April, Hayek says. This will provide a framework for dealing with how to export from one country to the other, and delineate guidelines for intellectual property and investment.

Regionally and globally, complementarity in matters of trade means that each country can act to facilitate the entry of the other into new markets they would otherwise have difficulty in penetrating, Hayek said. “I assume that when an Emirati company talks to an Israeli company, the topic of the GCC is on the table,” Hayek said but declined to cite specific examples.

He added that he expects a number of Israeli high tech companies to open offices in the UAE and to include among their staffers nationals of countries that do not have diplomatic relations with Israel.

The fintech company Rapyd has announced plans to open a 150-strong office in Dubai in March. “You can bring engineers from all over the world here,” Hayek said. “It is a very tolerant and open state. Companies will come because of markets, they will come because they found partners here for making a spinoff.”

Asked if this would develop into a large-scale trend, Hayek was guarded. “It remains to be seen,” he said.

While Israeli business activity in the UAE before the Abraham Accords was dominated by large firms, Israel now wants not only to “deepen and increase” such operations but also to get medium-sized and small businesses into the mix “so that there will be a broad base of peace,” Hayek says.

During his recent visit to the UAE, Israeli Prime Minister Naftali Bennett announced plans for a joint research and development fund. Hayek says the aim is to encourage Emirati and Israeli companies to “look for each other”, join forces and form business plans together.

In Hayek’s view, some Israelis have a misconception of what Israeli-Emirati business ties should be. “Some people thought the UAE is an ATM,” he said. “But the idea is not that I bring innovation and you [the Emiratis] bring money. Israel has innovation and money and the UAE has innovation and money. Israeli companies have to know that situated here are some of the smartest people in the world and the most experienced people in the world. You can’t act as if we are bringing them something they don’t have. You have to look at them as partners, as equals.”

In contrast to his enthusiasm for talking about trade, Hayek was less anxious to field certain questions about the Israeli-Palestinian conflict. The UAE may have stopped Israel from de jure annexation of a large swath of the occupied West Bank as a condition for normalization. But de facto annexation through settlement expansion and other means has increased over the last year.

The Iranian story is very important to the future of the Middle East and the world and therefore it must be solved. Most countries understand this issue. The UAE is a sovereign state and can decide to whom it gets closer and to whom it doesn’t.  But here, like everywhere in the world, they want to see Iran return to a line that is not aggressive but a correct line with a stoppage of their nuclear program, a line that stops all that they are doing around [the region], says Israel’s first ambassador to the UAE

Hayek declined to explain his government’s views on mounting violence against Palestinian civilians by  Israeli settlers, a phenomenon that has been criticized by Washington, the European Union and Israel’s Public Security Minister Omer Bar Lev.

While the UAE in May called on Israel to refrain from evicting Palestinians from homes in the Sheikh Jarrah neighborhood of East Jerusalem, Hayek said the Israeli supreme court would have the last say on the matter and that the UAE “understands that Israel is a state of law.”

“The UAE doesn’t interfere in the internal affairs of Israel,” he said regarding the settlement expansion. “The UAE wants to find a solution that will satisfy the Palestinians. The issue is not settlement yes or no. It’s foremost how you bring the Palestinians to a higher level of living.”

On the issue of the UAE improving relations with Iran, Hayek appeared to choose his words carefully. “The Iranian story is very important to the future of the Middle East and the world and therefore it must be solved. Most countries understand this issue. The UAE is a sovereign state and can decide to whom it gets closer and to whom it doesn’t.  But here, like everywhere in the world, they want to see Iran return to a line that is not aggressive but a correct line with a stoppage of their nuclear program, a line that stops all that they are doing around [the region]. Iran is not just Iran, It is [involved] in Lebanon and Syria. Therefore we have to find a solution without compromises, a genuine solution that is very long term and sustainable.”

Israel is currently building a larger embassy in Abu Dhabi and plans to bring in more diplomats. Asked if he faces any obstacles in his work, Hayek replied: “There is one difficulty. That there are only 24 hours in a day.”

The ambassador points to an aerospace cooperation agreement signed by Israel and the UAE as a metaphor for the potential of the relationship. “When I look at it the sky’s not the limit,” Hayek says. “We can reach the moon.”

An Israeli academic specialist on the Middle East, Ofir Winter, also voiced optimism about Israel-UAE ties but said it was too early to say whether the countries are merely in a honeymoon period or at the start of an enduring warm peace.

“There is a danger in raising expectations too high,” Winter, an analyst at the Institute for National Security Studies in Tel Aviv, told TRENDS. He said the roots of Israel’s “cold peace” with Jordan lay in the Jordanian government’s fostering, perhaps with Israel’s encouragement, excessive expectations of the economic benefits peace with Israel would bring.

“Great expectations were created and when they didn’t materialize there was great disappointment.” Winter said.