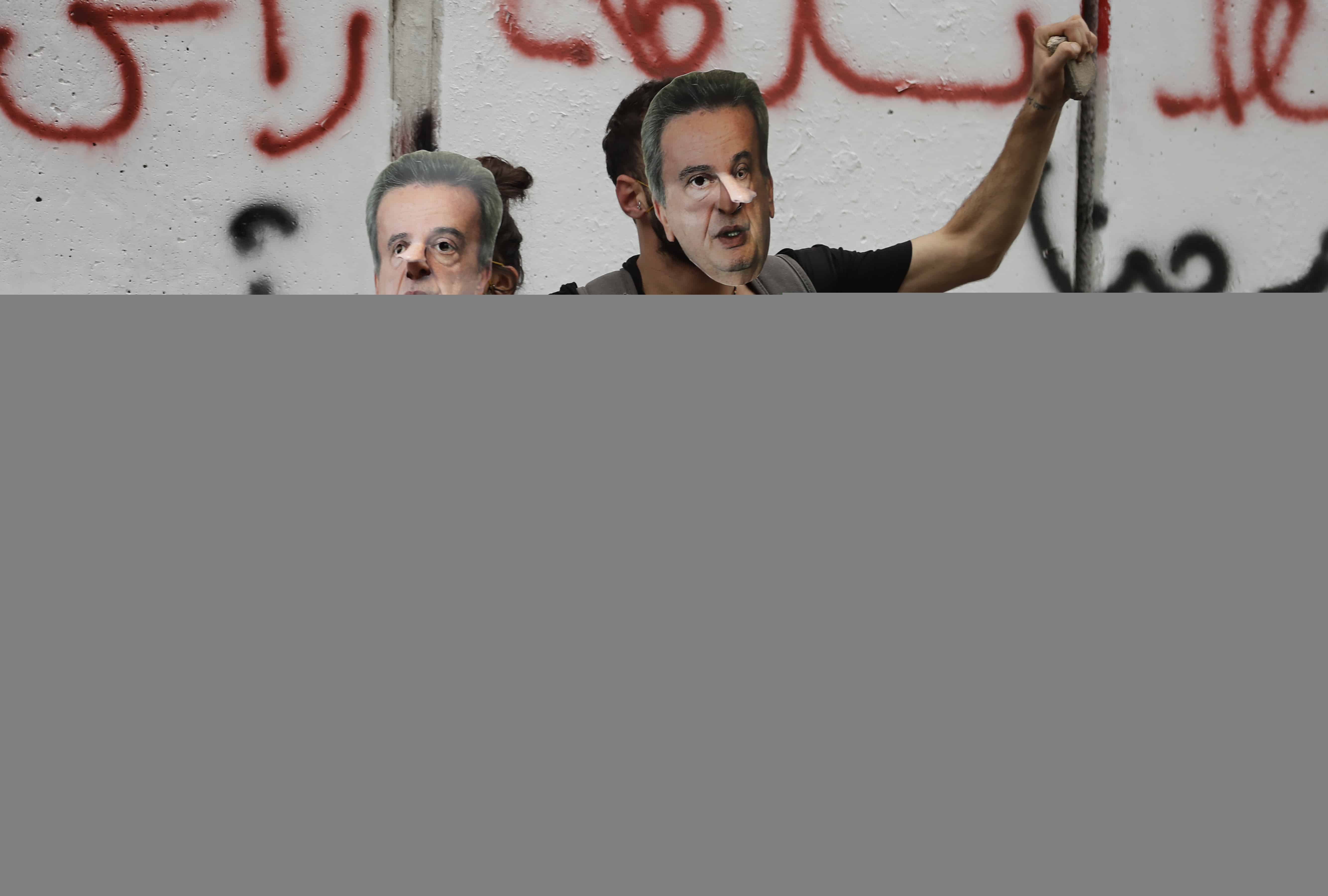 Lebanese anti-government protesters hold a mask of Lebanon's Central Bank Governor Riad Salameh during a protest in front of the central bank headquarters in Beirut to protest against the economic policies of the bank on November 27, 2019. AFP File Photo

Lebanon’s central bank Governor Riad Salameh on Monday denied that the institution he has led for 30 years was bankrupt, even as Public Health Minister Dr Firas Al-Abiad warned that the loss of financial liquidity meant grave danger for the country’s health system.

In a televised interview, al-Shami said: “The state has gone bankrupt as did the Banque du Liban, and the loss has occurred, and we will seek to reduce losses for the people.”

The claims seemed to be in line with exclusive reporting from TRENDS in December that said around $7 billion was missing from BDL’s books.

Salameh, however, on Monday was quick to deny Shami’s claims, saying that BDL was still going about its legally-mandated role despite losses in the financial sector.

Salameh’s statement said: “What is being circulated about the bankruptcy of the central bank is not true.”

He added in the statement that the bank was still going about its legally-mandated duties under Article 70 of the money and credit law, which states the bank is entrusted with preserving the integrity of the Lebanese currency and maintaining economic stability.

This, despite Salameh being one of the key people blamed for the situation that BDL, and by extension the country, is in.

A little more than week ago, France, Germany, and Luxembourg seized properties and frozen assets worth €120 million ($130 million) in a major operation linked to money laundering in Lebanon, the EU’s justice agency said.

The seizures were said to be linked to a probe launched by French investigators last year into the personal wealth of Salameh.

According to a statement from his office, he said he believed his deputy was speaking about “liquidity, not solvency.” The statement did not elaborate on this.

Lebanon is in the third year of a financial implosion, which is blamed by experts on decades of corruption and bad policies.

These have led the currency to crash in value by more than 90 percent since end-2019, and banks to lock most savers out of hard-currency accounts.

With nearly 80 percent of the population estimated to be currently living in poverty, Lebanon is witnessing a crisis that the World Bank says is the worst in the world since the 1850s.

The government is revising the plan as part of talks with the International Monetary Fund, with which it is seeking to set up an aid program.

Meanwhile, the crisis has reached a point where meat seems to be going off the menu across the country.

Health crisis on the horizon?

And now, there appears to be a health crisis on the horizon, with Lebanese Public Health Minister Dr Firas Al-Abiad on Monday warning that the loss of financial liquidity could negatively affected the country’s health system.

He disclosed an expected meeting with the authorities, including Salameh, in the hope of finding a solution within a short period of time.

Otherwise, he said, “the problem will become bigger than the one we are currently facing.”

The minister also said there has been a decrease in the number of Covid-19 cases in Lebanon, with positive cases dropping from 20 percent to 5 percent.

He also said that according the latest reports by the World Health Organization (WHO), the immunity ratio of Lebanese citizens and residents has exceeded 80 percent.

This seems to be a significant shift from the situation six months ago, when the WHO had warned that Lebanon’s health sector was about to collapse.