No rift with Arab govts over Abu Akleh’s death: Israel 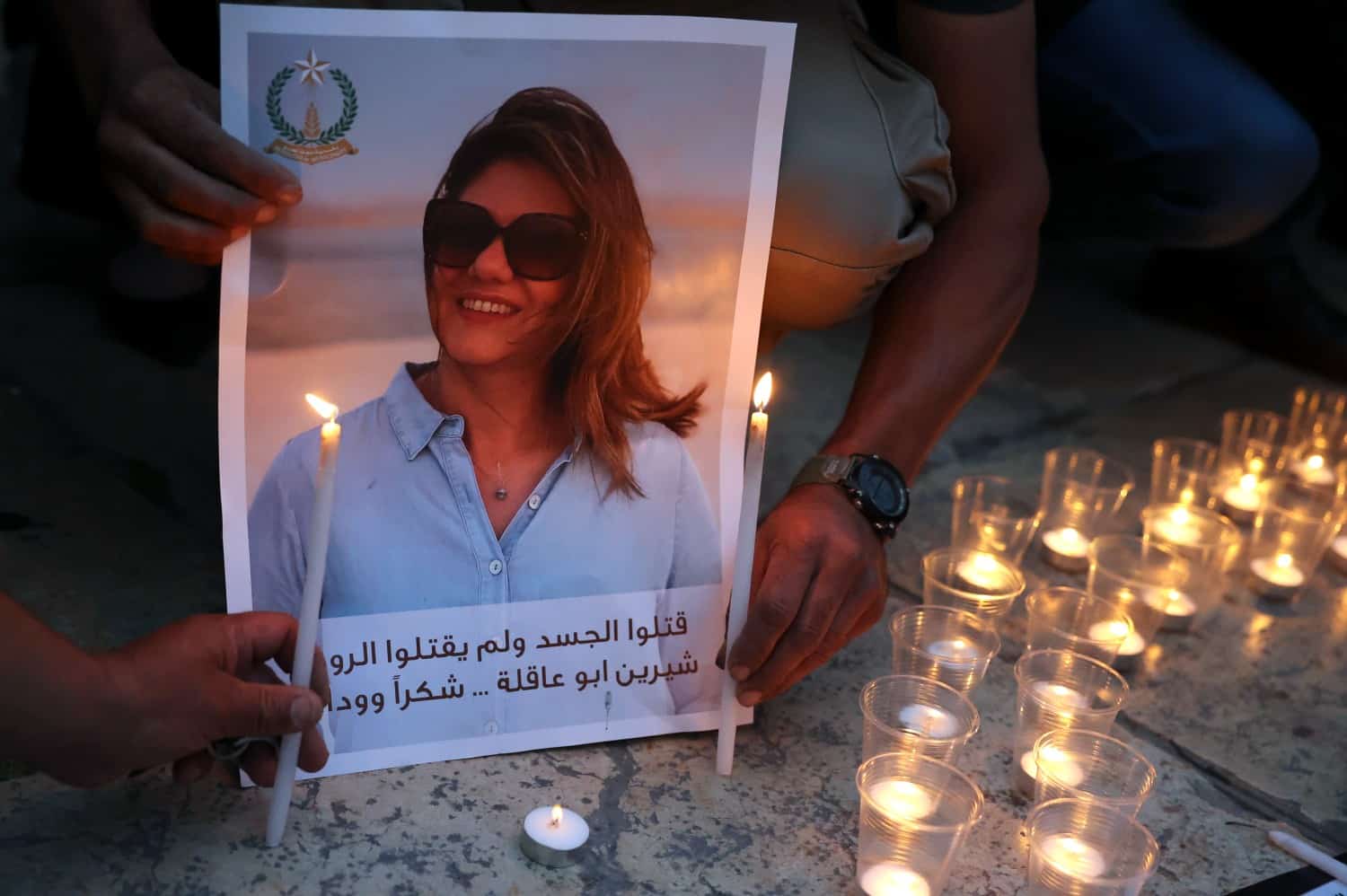 A candle vigil outside the Church of the Nativity in Bethlehem. (AFP)

Arab countries are showing sympathy with Israel’s position in the global tug of war over the death of Palestinian-American journalist Shireen Abu Akleh, a senior Israeli official has told TRENDS.

Despite Abu Akleh’s popularity in the Arab world for giving voice to suffering Palestinians and a succession of investigations by leading US media outlets pointing the finger at Israel, Arab governments in touch with Israel have no differences with it regarding the May 4 incident during which the Al Jazeera’s West Bank correspondent and her producer were shot, according to Israeli foreign ministry director for Middle East affairs, Eliav Benjamin.

“If anything there is more understanding than criticism from most of the countries if not all of them,” Benjamin said.”At the end of the day, they all know fair and square what it’s like in the battlefield.”

“All the countries in the region, those in the midst of it and those who understand what the battlefields look like and what real life looks like understand not just the sensitivity but also the risks of being in the battlefield,” Benjamin said.

He added that Israel speaks “very openly and candidly” with whoever raises the issue.

The disclosure about Arab government’s stances, if borne out, could add fuel to a controversy that has turned into an epic battle over the legitimacy of Israel’s 55 year old occupation of the West Bank. The occupation deepened further this week as the army conducted a live fire military exercise among Palestinian villages in the occupied West Bank that was condemned by the Association for Civil Rights in Israel.

Since the killing of Abu Akleh after she went to cover an Israeli army raid in Jenin, there have been frequent calls for an international investigation to determine if the army fired the fateful bullet, as multiple eyewitnesses have said..

Israel has rebuffed the calls and mounted a major damage control effort, including accusing its critics of antisemitism. It says its own military is investigating thoroughly to reach the truth and asserts the 51-year-old journalist, who wore protective gear and a sign identifying her as a member of the press, may have been killed by Palestinian militants or mistakenly by a soldier.

The Palestinian Authority concluded she was intentionally shot by a soldier but has refused to hand over the bullet to Israel.

However, an investigation by the New York Times published on Monday concluded there were no armed Palestinians near Abu Akleh when she was shot, contradicting one of the main explanations Israel has offered.

Benjamin said Israel’s ability to thoroughly investigate the shooting was being hampered by a refusal of the Palestinians to cooperate.”All appreciate the openness with which Israel is conducting the investigation and handling the matter,” he said.

Asked to comment, Dror Sadot, spokeswoman for the Israeli human rights group B’tselem, said the Israeli army cannot be trusted to investigate itself.

“From our many years of experience we know those investigations are never to get to the truth. Almost never is someone held accountable.International intervention is the only option to hold accountable the people responsible for the killing of Shireen Abu Akleh.”

More generally, the Israeli official stressed that countries that have normalized relations with Israel since Sept 2021, do not view what critics view as expansionist Israeli policy on the Palestinian issue as an obstacle to furthering relations.

Regarding the upcoming visit of Joe Biden to Israel and Saudi Arabia, Benjamin termed it “an important signal to the region of the importance the US relates to Saudi Arabia and the centrality of Saudi Arabia in the region and beyond. The actual visit, meetings and publicity carry enormous weight. We’ll have to wait and see what the outcomes are in the immediate term and long term. There is big potential here for some traction.”

He indicated that ties with Saudi Arabia, which has thus far avoided public meetings with Israel, are edging ahead in “baby steps.” In Benjamin,s view the UAE and Bahrain would not have signed the Abraham Accords without Saudi approval. Saudi agreement to allow Israeli flights to Bahrain and the UAE to overfly the country and “growing interest and interaction of businesses from Israel and Saudi Arabia” were positive signs. He declined to elaborate on the business contacts.

“We’re seeing a trajectory but let’s take it at the right pace and go about it in the right way. Inshallah, we’ll see good things happening,” he said.

As for ties with the UAE, the volume of trade more than doubled during the first quarter of 2022 compared to the previous year and is expected to rapidly accelerate further due to the recent signing of a Free Trade Agreement. The pact enables 96 percent of the trade between the countries in products and merchandize to be tax free.

Benjamin says this will allow Israel to take advantage of the UAE’s position as a regional hub and store products in Emirati warehouses in Jebel Ali port, shortening the time for reaching other markets in the region once they have been packaged or repackaged. “This means Israel can export or import in larger quantities and the Emiratis will get money from storage,” he explained.

Israeli projections are that bilateral trade will rise from US$2 billion at the end of this year to “six billion and then beyond” within a few years, Benjamin says.

Among the products imported by the UAE from Israel are diamonds, telecommunications equipment, electronic products and chemicals. Israel imports the same types of products, as well as machinery and computer related products.

Benjamin termed the FTA “another stamp on relations, signaling other countries that doing business with Israel is good.”

But Israel is also looking for other ways to boost trade. It is setting its sights on Indian companies in the UAE as a catalyst to further increase commerce eastward, Benjamin said. “The UAE serves as a regional logistical hub to get to other places in the Middle East, Africa, southeast Asia and Asia and the Pacific and we see the importance of the UAE and working with Indians in this context.”

Benjamin played down the findings of polls taken by American political scientist David Pollock of the Washington Institute for Near East policy suggesting that support for normalization is not as strong on the popular level as on the official level.”We are seeing more and more cooperation in the region, not just bilaterally but also at the regional level to face challenges and seize opportunities. This is the context in which we have to look at things,” he said.

But he conceded that few Emiratis have visited Israel. He stressed that Israel intends to exert great efforts into developing the “people to people” aspect of relations with the UAE.

According to Benjamin, the Abraham Accords have helped prompt a surge of trade between Israel and its older peace partners, Jordan and Egypt, previously known for having only “cold peace” with Israel. “We attribute a lot of this to the accords and to interest in Jordan and Egypt to not being stuck behind, to their wanting to enjoy the fruits of the accords and to their realization that it is now more than kosher-or halal in regional language- to do business. with Israel.”

But he said the peace’s with Jordan and Egypt are not reaching their potential level due to resistance to normalization among the respective publics.