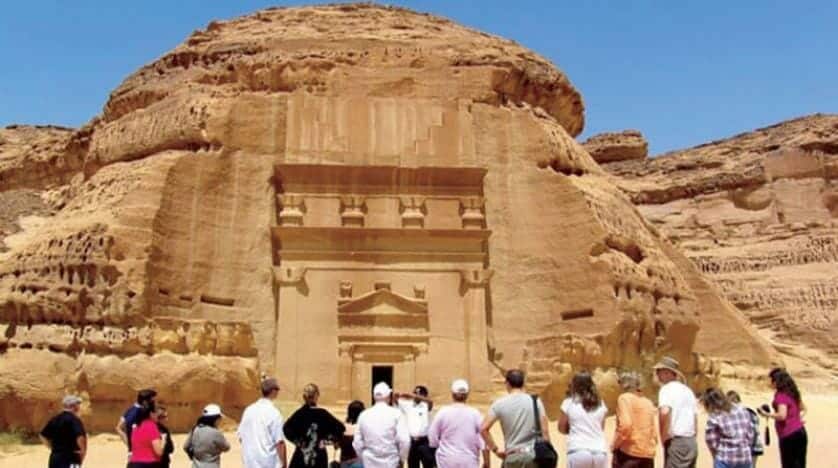 Saudi Arabia  is actively promoting its tourism sector to attract 100 million tourists by 2030.

As part of the “Saudi Arabia Vision 2030,” the government has drawn up ambitious plans to diversify its revenue sources and move the country away from its dependence on oil revenues.

Despite the COVID-19 pandemic, domestic tourism grew as the authorities focused on marketing tourist destinations, developing infrastructure and services, and signing agreements worth more than US$30 billion to improve infrastructure.

The government hopes to increase the tourism sector’s contribution to the GDP from 3 percent  to more than 10 percent by 2030 while also creating one million new job opportunities, bringing the total number of jobs in the sector to 1.6 million.

Acordingly, the Saudi Ministry of Tourism announced that it would provide 100,000 jobs in the tourism sector by 2021 only. It stated that anyone could apply for the positions through the federal portal “Taqat.” The applicant should be a Saudi national, aged 17,  not be enrolled in social insurance, or retired or a student.

Recently, the Saudi Tourism Authority (STA) launched the “Saudi Summer 2021” programme, which includes a diverse range of destinations and events, as well as the participation of 250 private sector partners with prices starting at US$53.3 per person, depending on the experience and destination. The STA funds the initiative.

Saudi Arabia has more than 150 archaeological and heritage sites that are open for local and international visitors. The sites include 22 government museums, 174 private museums and more than 50 urban heritage sites.

The country has developed several heritage-related tourism projects in more than 25 tourist destinations, which include traditional markets and heritage villages. There are also historical roads, popular markets, traditional industries, and popular foods.

According to the Vision 2030 programme, the new historical projects are expected to contribute significantly to the preservation of the country’s cultural heritage. As such, they should improve support for cultural tourism in the country.

The President of the General Authority of Civil Aviation in Saudi Arabia, Abdulaziz bin Abdullah Al-Duailej, and the Vice President of the International Air Transport Association (IATA) for Africa and the Middle East, Kamel Hassan Al Awadi, signed an agreement on 7 July 2021 to set up IATA’s office in Riyadh.

According to the Saudi Press Agency, Al-Duailej emphasised enhancing joint cooperation with all stakeholders of the civil aviation sector contributing to the industry’s development at the regional and international levels.

The agreement is in line with Saudi Arabia’s policy for the development of air transport. It will also supplement the government’s efforts to support and empower organisations based in the country.

A new national carrier has also been announced in tandem with the national strategy.

The World Tourism Organization has opened its first regional office outside of Madrid in Riyadh, dedicated to the Middle East.